I had the honor of interviewing both the author and illustrator of I Dissent: Ruth Bader Ginsburg Leaves Her Mark. Both Debbie Levy (author) and Elizabeth Baddeley (illustrator) were so gracious and kind to answer my questions, and I was excited because they'd never been interviewed together. I've read a lot of author/illustrator interviews, and I usually try to find something new to ask beyond the usual "what inspired you to write this book." I think that you'll find this interview as interesting as I did!

The book is a telling of the life story of one of my own heroes, Justice Ruth Bader Ginsburg. I love the tagline of the book: "disagreeing does not make you disagreeable." It's gorgeous to look at, engaging to read, and really wonderful for kids and adults alike. Yael gave it two thumbs up, and I know she learned a lot because she asked questions and showed me some of the pictures as she was reading. It is noted for readers in grades 3-5, and I would agree with that - she really "got" some of the big ideas in a way that Solly (kindergarten) didn't.


The illustrations and the words flow so beautifully together. Was the whole book a collaboration? How did you come together to create the whole that is the book?


Debbie: We worked separately for most of the project, and that is par for the course in the picture book world. I wrote the words. Elizabeth created the art—including the bold and impactful hand lettering of important words like DISSENT, DISAGREE, PROTEST, OBJECT, RESIST, PERSIST, and so on. When you have excellent editors and art directors, as we did, this approach to book-making tends to work out nicely!


Elizabeth: I agree with what Debbie said. Many thanks to our art director, Chloe Foglia and editor, Kristin Ostby.
Have you met Justice Ginsburg? (Has she read the book?) What do you want to say to her? What do you hope she says to you?


Debbie: Yes, I have met her. But, you know, even if you don’t have the opportunity to meet Justice Ginsburg in person, there is an abundance of excellent video and audio for anyone to enjoy. I like this interview she gave to Katie Couric in 2016 (and not only because she talks about I Dissent at around minute 25:00!). Anyone can go to the Supreme Court website and hear audio of her questioning lawyers in oral arguments before the Court. Here is the 2013 Voting Rights Act case of Shelby County v. Holder, for example. I also really like this C-SPAN video of her visiting her Brooklyn elementary school in 1994, soon after she became the 107th Supreme Court justice.


Yes, she has read the book! She read the manuscript before we went to print and gave me some helpful notes on it. And, after the book was published, she read it aloud to a gathering of Jewish book lovers last fall, prefacing her reading by telling girls, and all of us, to “be brave . . . and not be put down.” Here is the video of that event, courtesy of PJ Library. I wasn’t present at that event, nor did I know a thing about it—so you can imagine my delight when it came to my attention! 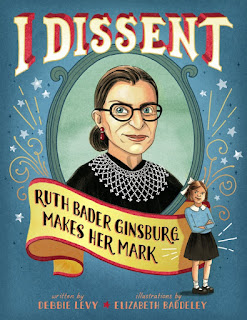 Elizabeth: I have not been lucky enough to meet Justice Ginsburg but I did receive a really nice note from her (Debbie is just now learning this)! I sent her an original piece of art from the book—from the page where is arguing with her friend Justice Scalia. She immediately sent me a very kind note. She told me she was sending it down to the court carpenter shop to have it framed. I would have never guessed they have a court carpenter shop!

What was the hardest thing about writing/illustrating this book?


Debbie: The hardest thing was writing about law and court cases, and the work of judges and justices, in a manner that is accessible to young children and doesn’t bog down the story of Justice Ginsburg's life. This type of discussion arises in the second half of the book—once she is a lawyer, and then a judge, then a justice. I’ll just say that the manuscript went through many revisions!
Elizabeth: A difficult aspect of illustrating this book was capturing Ruth as a young girl. There are many photos of her as she is now and even when she was a young woman, but I only had one photo of her as a child—and she was only about 2 years old in that one! I gathered many photos of children I thought might look like her, looked at photos of her in her late teens and sort of pieced her look together from there.
How did you choose which parts of Justice Ginsburg's life to tell and which parts to leave out?


Debbie: That was probably the second hardest thing about writing this book. I had drafts of the manuscript that included details about the Jewish summer camp she attended, riding horseback and paddling canoes (and, when she was an older camper, leading services). Then there were these delectable little facts: Ruth played a princess in a school play called “The King’s Cream Puffs.” In high school, she was a member of the pep club for sports teams, the Go-Getters. And, going back to her very young life: Ruth Bader was actually born Joan Ruth Bader, but when her mother, Celia, registered her for kindergarten and found that there were two other Joan Ruths in the class—she decided that this Joan Ruth henceforth would be “Ruth.” (Also, she had the nickname Kiki as a girl!) And then, zooming ahead to her tenure as a justice, there’s the fact that Bubbe Ruth Bader Ginsburg became the first justice ever to host a Supreme Court party with peanut-butter-and-jelly on the menu—for her granddaughter’s third birthday.


Great facts, aren’t they? But a picture book narrative is more than a collection of fun facts. Reluctantly, I had to let these and other tidbits go to construct a book that told the story of her life through the lens of her many disagreements, that did not have too many tangents (or too many words), and that focused on facts and events from her childhood that I considered most important in shaping the woman she became. 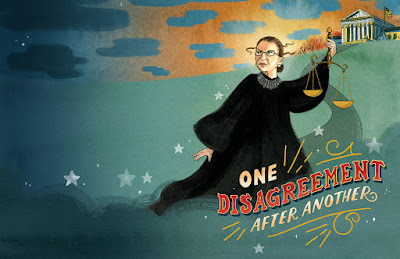 My favorite part was the way that you explained and illustrated Justice Ginsburg's friendship with Justice Scalia. What is your favorite part of the book?


Debbie: I favor that part of the book, too.


I also particularly like the page spread that has Ruth as a young lawyer considering the demeaning way the Supreme Court had treated women in its decisions, with two especially obnoxious quotes from Justice Joseph Bradley (“The natural and proper timidity and delicacy which belongs to the female sex evidently unfits it for many of the occupations of civil life”) and Justice David Brewer (“Woman has always been dependent upon man”) blown up in Elizabeth’s wonderful hand lettering, and on the opposite page a strong-looking RBG and more strong hand lettering: “Ruth really really DISAGREED with this!”
Elizabeth: The Scalia friendship is also one of my favorites, but I really love the spread of her in elementary school when she “protested” against having to write with her right hand. I am also a leftie and though I was very lucky to never have been forced with my right hand, I often experienced a wrist covered in chalk dust--a detail I’m guessing only other fellow lefties may have picked up on.
What was your favorite book as a child? What are you reading right now (for grownups or kids)?


Debbie: The All-of-a-Kind Family books by Sydney Taylor. Truly. I took them out over and over again from the Silver Spring, Maryland library when I was a girl. So to be a winner of the Sydney Taylor Award is more meaningful to me than I can say.


Right now, I just finished Zadie Smith’s Swing Time and am about to start Jonathan Safran Foer’s Here I Am.
Elizabeth: Oh wow, too favorite childhood books to name! Picture books were a very large part of my childhood. I had a mother who took us to the library weekly and both parents read to us on a nightly basis. All of the Steven Kellogg books were in high rotation on our book shelves as well as the Berenstein Bears books (I’m clearly a child of the 80’s) I probably memorized every detail of Cloudy with a Chance of Meatballs, Pippi Longstocking, The Little House on the Prairie series and Harriet The Spy were often read aloud with the latter being one of my all time favorite books!

I think I Dissent must have kicked off a non-fiction streak in my current reading. I’m reading At Home by Bill Bryson and recently read River of Doubt by Candice Millard which is so rich in imagery, the books the littered with dog ears of pages I’d love to illustrate some day. I also listen to a lot of audiobooks while I work and have just started The Underground Railroad by Colson Whitehead.

Thank you, Debbie Levy and Elizabeth Baddeley, and to the Association of Jewish Libraries for extending me this great opportunity! 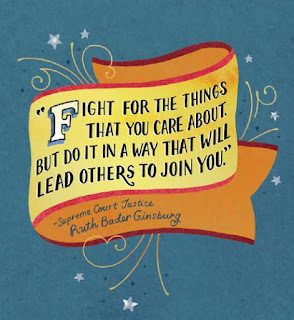 *The Sydney Taylor Book Award is presented annually to outstanding books for children and teens that authentically portray the Jewish experience. Presented by the Association of Jewish Libraries (AJL) since 1968, the Award encourages the publication and widespread use of quality Judaic literature. Gold medals are presented in three categories: Younger Readers, Older Readers, and Teen Readers. Honor Books are awarded silver medals, and Notable Books are named in each category. Here is the list of all 2017 Award, Honor, and Notable Books.
Written by Phyllis Sommer at 6:00 AM 2 comments: