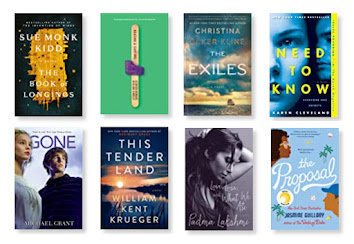 This Tender Land by William Kent Krueger - This was an extraordinary and beautiful book, heartbreaking and haunting. I honestly didn't want this story to end. I think I will certainly put this one into the top five books I've read this year.

Gone by Michael Grant - this is the first in a very popular dystopian YA series. All the grownups disappear, and kids start developing super powers...and....I found it very dark and a little convoluted. I'm not compelled to read any more of the series, but mostly because I have a very long to-read pile! (It also could be that I read it right after This Tender Land, and so it just didn't quite hold up to that standard.)

The Proposal by Jasmine Guillory - a delightful sudsy read...like a delicious bag of candy that I enjoyed and didn't even mind that there wasn't any real nutritional value! Also, a lot of nicely represented diverse characters....

Love, Loss, and What we Ate by Padma Lakshmi - I loved the Hulu series on food in America, but I have never watched Top Chef, so I felt like she was a total unknown to me! I had no idea that Ms. Lakshmi had such an interesting and fascinating story. I found the book to be a little bit long, but I was really curious. She seemed very honest, a little self-centered (it was a memoir, though, so you've gotta give her some credit there), and I liked the focus on food (it made me hungry)!

Need to Know by Karen Cleveland - A fun spy novel (think: The Americans) even though I was slightly disappointed by how clueless the main character seemed to be...

The Exiles by Christina Baker Kline - This was a powerful and moving novel about women, convicted of fairly crimes, sent from England to Australia as punishment. I was somewhat unfamiliar with this particular episode of history (I knew that Australia was a convict colony, but I didn't realize that whole boatloads of women were sent there!) and I found the story to be well-told, compelling, and heartbreaking.

Heating Cooling: 52 Micro Memoirs by Beth Ann Fennelly - delightful and fun bite-sized bits of memoir. I liked how it made me think about minimalist writing - what's the shortest way to say something? I'm a fan of the 6 word memoir and the short-short story, so I'm not surprised that I enjoyed micro memoirs too! I'd like to think about writing some of my own!

The Book of Longings by Sue Monk Kidd - I wanted to like this book but I was very frustrated by it. I am sure she did a lot of research, but there were many things that just felt frustratingly wrong, including most of the Hebrew dates and how the calendar works. It's a book about Ana, the fictional wife of Jesus. It felt like Ana was a little too "woke" for her time...I just found it mostly uninteresting.