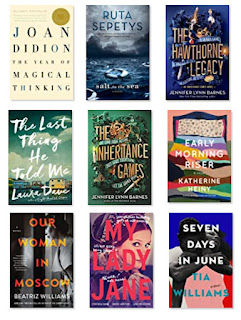 I'm back at it, reading and writing short notes on all the books (I hesitate to say "reviews" - more like a little comment on each one).

So here goes! What have you been reading?

The Year of Magical Thinking by Joan Didion - when I saw that she had died at the end of 2020, I realized I'd never read anything by her. This was powerful and hard, but wow, what a writer.

Early Morning Riser by Katherine Heiny - I loved this book. It doesn't have a complicated plot, and there's no great mystery - just a somewhat ordinary life intertwined with some other lives, and told simply and beautifully. I was sad when it was over.

The Inheritance Games
The Hawthorne Legacy by Jennifer Lynn Barnes - the first two books in a trilogy (book 3 doesn't come out til August) that is comparable to the Westing Game and Knives Out - puzzles and intrigue and wealth and inheritance...I'm not sure I needed to read the second book, but I had a lot of fun while reading both. (the middle book of a trilogy is often the annoying one, right?)

The Last Thing He Told Me by Laura Dave - this was on a lot of "best of 2021" books and for some reason, I resisted it. But it came up in my Libby holds and so I dove in. It turned out to be readable and engaging, but a little far-fetched. I did end up enjoying it as long as I just leaned into the plausibility.

Salt to the Sea by Ruta Sepetys - I really like when I can learn something completely new, in this case, about a terrible maritime tragedy during WWII. That said, I thought this book was convoluted and tried to do too many things at once, and so I felt like it ended up doing none of them very well. The characters felt flat and the emotion was confusing.

Seven Days in June by Tia Williams - Loved this one! It seemed like it would be a fairly straightforward romance story, but it became so much more. I also want to be friends with Audre, the daughter. Highly recommend this one.

My Lady Jane by Cynthia Hand, Brodi Ashton, Jodi Meadows - fun, silly, irreverent, a little fantastical, totally absurdist - a totally wacky retelling of actual Tudor history (okay, it takes a few liberties) and thoroughly enjoyable. Apparently, it's a series! But I'm going to move onto something else now.

Our Woman in Moscow by Beatriz Williams - I liked this spy-ish novel, but it moved a little too slowly. It was more of a historical fiction trying to be a spy novel - I think I wanted more spy and less family drama. Still, an enjoyable read. (PS my dad says to tell you that he liked this one a lot)

Written by Phyllis Sommer at 9:02 AM No comments: