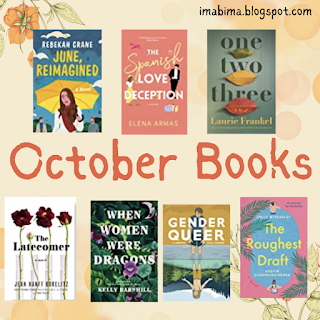 The Latecomer by Jean Hanff Korelitz - One of my favorite books of the year, I could not put it down. The style was so unique, the story was great, the characters were incredibly layered, and I loved so many of the big questions that it raised.

One, Two, Three by Laurie Frankel - okay, this was ALSO one of my favorite books of the year. Each character's voice was so clear and distinct, the story was both heartwarming and heartwrenching, and I just couldn't put it down. (It was a good couple of weeks of reading)

The Spanish Love Deception - It was fine. A typical romance novel, and I found myself a little annoyed by the characters.

June, Reimagined - another romance novel, this one with a little twist of a character who wants to reinvent herself and her life, along with figuring out how to handle a big family secret. Not bad.

Gender Queer by Maia Kobabe - This is an autobiographical graphic memoir, and wow. It's a clear and interesting look at what it means to wrestle with and try to explain different gender and sexual identities, while one is also figuring them out for oneself! My sixth grader brought this book home, it was passed on from a friend. While I know he was proud to be reading a book that is "the most banned, Mom," I was also aware of the opportunity to have some big conversations after we both read it. I'm not sure I'd really recommend it for sixth graders, but I was glad that he felt he could share it with me.

When Women Were Dragons by Kelly Barnhill - I loved this alternate-history story of a 1955 "mass dragoning," when thousands of women spontaneously turned into dragons. It was a really interesting look at how women's roles and power have changed over time, and how rage can be an important driving force for change. I did think that it was a little long - meaning, I got the "big idea" pretty quickly and the story could have been pared down a bit. But I did like this one a lot!

The Roughest Draft by Emily Wibberly - Back to romance novels, this one a book about two authors who work together on a hit book and then stop working together. Will they find a way to work together again? Will they fall in love? If you've ever read a romance novel, I think you can answer these questions for yourself :-) This wasn't bad, but it wasn't my favorite.