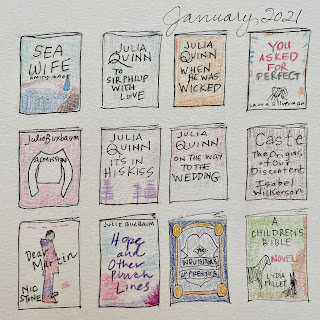 Last year, I decided to write monthly reviews of the books I've read and I enjoyed doing that so much that I am hoping to continue into this year! Oh, and this month, I also drew all the covers. We'll see if that lasts from month to month...

So here's the January list. What are you reading?

To Sir Philip with Love by Julia Quinn
When He Was Wicked by Julia Quinn
On The Way To the Wedding by Julia Quinn
It's In His Kiss by Julia Quinn - apparently, sometimes I can be a completionist, because I felt a strong need to finish the Bridgerton series. Although they were somewhat formulaic and predictable, they were also delightful reading candy.

Sea Wife by Amity Gage - as a "family at sea" in the current world, I felt such a draw to this actual family at sea story. I get terribly seasick but I even found myself wondering what it would be like to spend a year on a boat. It was beautiful and terrible and gorgeously written.

Admission by Julie Buxbaum - A re-telling of the Varsity Blues scandal, from the viewpoint of one of the teens. The character felt a little too blind to her own privilege, and yet that blindness felt pretty real and true, also. One of my favorite authors.

Caste: The Origins of our Discontent by Isabel Wilkerson - wow. Can't stop thinking about this one, if only for the commitment to changing our linguistic patterns around some of the biggest ideas / issues in our country. Looking forward to her keynote at the CCAR convention!

Dear Martin by Nic Stone - Important and gut-wrenching read. I appreciated that the author did not overuse the letter-writing and the growth of the characters was remarkable. I am grateful to live in a world in which all stories get told.

Hope and Other Punch Lines by Julie Buxbaum - One of the few 9/11 books I've read, and this one examined grief, survivors' guilt, with a dose of teenage humor. Apparently, I've had this one on hold for a little while (I forgot) and it came up shortly after I finished reading Admission!

You Asked for Perfect by Laura Silverman - a recommendation of my Confirmation students, I loved this book. It felt like such an interesting counterbalance to Admission, since this was about a student who was working very hard and worrying about their admission to school in a different way. I am so appreciative, aware, and fascinated by the amount of LGBTQ love stories in YA literature today.

The Inquisitor's Apprentice by Chris Moriarty - I just finished reading this one aloud to Solly. We enjoyed it, even though I think it was a little slow-going! It was a fun alternative-history re-imagining of New York City with magic. And there's a sequel! So we'll read that one next. (Also this was a PJ Our Way selection, but I think it would have been hard as an independent read for Solly, a 4th grader)

A Children's Bible by Lydia Millet - So this is the time of year that I'm reading off of all the lists of books recommended at the end of the previous year. I have no idea who recommended this book, and I knew nothing about it as I started reading it. It was weird and chilling, and it definitely kept me up at night. It's a combination coming-of-age, generational divide, and climate change cautionary tale all in one. A really great book, even though it totally gave me nightmares.

Written by Phyllis Sommer at 7:00 AM No comments: