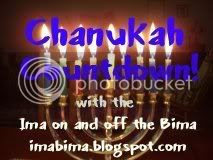 (This is a re-post of this Chanukah Chaiku I wrote last year. Did you know there's a new Hanukkah Haiku book out? We have it in our synagogue's library and it's darling.) 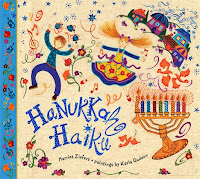 Alex the Great died.
His empire was split up.
Who owned Judea?

King Antiochus
was the new king for the Jews
but he wasn't nice.

"Give up your Torah,"
he said to the Jewish folks.
"Bow down to my gods."

The Jews weren't too pleased.
He defiled the Temple --
sacrificed some pigs.

Things were bad for Jews
They were being killed for faith.
But one guy stepped up.

In his town, Mod'in,
Mattathias stepped up
He said, "Let's rebel!"

His five sons followed
They helped lead the rebellion
and fled to the hills.

A guerrilla fight
against the Syrian-Greeks
hit-and-run fighting.

Mattathias died.
His son Judah took over -
he was a great guy.

He struck fast and hard
and finally the Jews won -
a long time coming!

Back to the Temple
but it was totally wrecked,
defiled, defaced.

They made it holy,
rededicated to God,
prepared for worship.

A legend for sure:
There was no oil to find
to light the great Lamp

One small flask was found,
only enough for one day
but it lasted EIGHT!

Today we rejoice
with victory dances,
remember that time.

The more likely tale:
They missed Sukkot in that year
and observed it late.

Eight days of the feast
have been translated to this
time of Chanukah.

Either way, it's fun
to eat latkes and candy
and play the dreidel.

Happy Chanukah
(However you spell the word)
let's all celebrate!

Build-A-Bear Workshop is selling a really cute Moose for another holiday. They were very sweet to send me one to tell you all about and it is absolutely gorgeous. It is soft and cuddly and the antlers light up, similar to Bruce, I would imagine. His name is Hal and he and his pal Holly have a sweet little story book that come with them.

I think that it is a great holiday gift (and I plan to gift it to my neighbor's little boy even though my kids really love it and want to keep it!) and I do love the whole Build-A-Bear thing -- what a fun activity that gets you a friend at the end!

(I actually thought their stuff was much more expensive, too. There are some very nice looking inexpensive animals. If they are as soft and cuddly as Hal, it looks like a great product.) Go check out their fun stuff. Could be a fun winter break activity...(even though they don't have a rabbi-bear)

Thanks to Build-A-Bear, I have one $10 gift card to Build-A-Bear Workshop to give away to one of you, my lovely and wonderful readers! Such a nice Chanukah gift...

What do you have to do?

To enter, leave a comment on this post!
Earn an extra entry by tweeting about it. Let me know below in the comments.
Comments will close at 7pm Saturday, December 20th. (after Shabbat)
Comments closed.....the winner is Leora, @leoraw !!! Mazel tov!

Come back all week and next for some great Chanukah posts and giveaways!
Written by Phyllis Sommer at 12:04 AM

I love the Chanukah book. There are more and more great Chanukah books every year. What great time to have a young child!

Wow, a great haiku and a giveaway :)

My kids haven't been exposed to the beauty of build-a-bear yet. I made a bunny for my daughter before she was born though. Fun.

It's always nice to see more Chanukah books out there. There certainly seem to be more than when I was growing up.

I love that there are so many more books, decorations and other Chanukah items available these days. My kids will never know it was any different. Thanks for the opportunity.

Like your Haiku, especially the part where you mention Modi'in. I told my daughter when we read a Chanukah book that she was in Modi'in. "Remember? you ate the big pizzas and played in the park?" She said, oh, yeah.

My IL's sent the boy a build-a-bear toy and their cats sent him a Chanukah shirt for said toy as a Chanukah gift (yes, the cats send gifts too). I think we may take the kids this year to build their own real B-A-B's for the first time ever.

I love that Build-a-Bear too. They rock!
My kids and I hang out in there....shopping as if.......we were in Macy's or something!
Fun times.
Great giveaway.

Commenting and tweeting from the road! I am soooooo techy!

That book looks awesome! Oh, I was in Build-A-Bear last week, and they did have a Chanukah T-shirt to clothe a bear in. Thought that was pretty cool!

Would love to take the kids over break to do something like that. Thanks for all the fun!