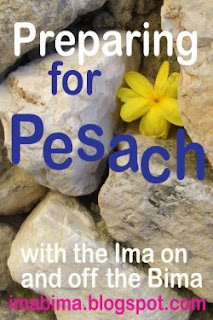 Back in January (!) I received an awesome box from Manischewitz, with the following contents: 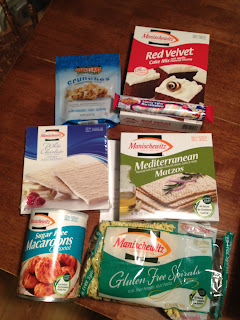 My kids were so excited, they immediately opened the container of (Sugar Free) Macaroons and consumed half the package before I even realized it. And then they proceeded to eat them over the next few weeks. "The best macaroons!" they pronounced them. I must admit, that was a good enough review for me and I didn't get even one! (Do you like macaroons? This is a love-hate thing, I've found. I found a recipe for Pesadik brownies that uses chopped up macaroons...now that's delicious.)

Then, I made a whole (almost) Pesadik dinner for the family. I used the gluten free pasta to make a baked pasta dish, and I made the Red Velvet Cake. First...the pasta dish:

I didn't tell them it was gluten free pasta. It was a little gummy while cooking, and it definitely isn't the same as the "regular" pasta that I usually make, but my kids ate it with no complaints at all! My brother-in-law, who often eats gluten-free products, said that it was quite good gluten-free pasta. High praise! 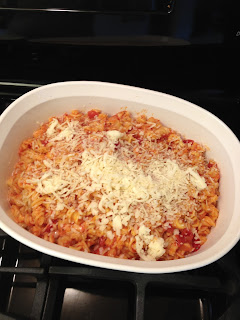 Then, the cake:
Now, if you've been around here before, you've noticed that I'm a baker.
So I don't usually buy mixes like this, on Pesach, or ever! But how could I not try it out? 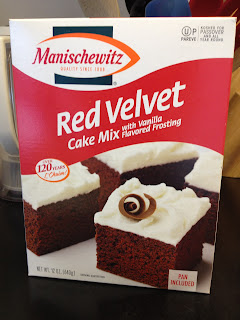 I must admit, it smelled like matzah meal and I didn't have high hopes as I mixed it up. 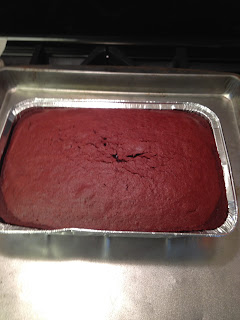 And I thought the frosting had an odd flavor when I tasted it.... 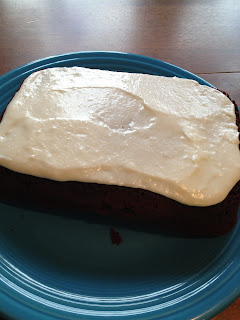 But my kids ADORED it. In fact, Sam asked if I would make it for his birthday next year.

Which doesn't mean that he's going to get it for his birthday. But I thought that was amazing praise.
It actually tasted quite good...like real red velvet cake! Impressive for a Pesadik baked good that came out of a box.

As you can see from the picture above, we also got some White Chocolate Covered Matzo - which we thought was too sweet, and some Mediterranean Matzos, which I think will make awesome Matzah Pizzah.

The other notable thing in the package were the Guiltless Gourmet Crunches - a sweet, crunchy cashew snack food that was really delicious. I would definitely eat that year round.

Thank you to Manischewitz for the samples!

So....as you head on out to do your Pesach shopping, these are some of the new offerings you might find on your shelves! What new products are you going to try this year?

(Disclosure: I received the package from Manischewitz and we tasted the food. I was not compensated in any other way for this review!)