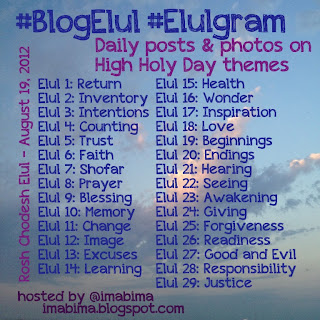 I decided that I would invite friends to do a "guest post" here on Ima on and off the Bima during BlogElul. There were quite a few motivations - 1) writing daily posts on two blogs - whew! 2) encouraging non-bloggers or new bloggers to "get out there" and just do it and 3) to hear from other people! So I hope you enjoy them - there are a number of guest posts coming up in the next two weeks! Yay!

Today's guest post comes from Rabbi Kari Tuling, who serves as the rabbi of Temple Beth Israel in Plattsburgh, New York and is finishing a PhD in Jewish Thought. You can follow her theological blog, “To Whom it May Concern,” at ravkari.wordpress.com. On a totally personal note, Kari and I were chevruta (study partners) in rabbinical school and she is one of my favorite people. Her boychick, Ben, and my son David were born a few months apart, and they were early BFF's, just like their mamas. Kari was one of the signers of my ketubah! Oh, and she's kinda brilliant. (...and it's a first for my blog - I don't think there's ever been a footnote before!)

[This entry has been cross-posted on “Kol Isha: Reform Women Rabbis Speak Out!” at womensrabbinicnetwork.wordpress.com]

It has happened to me more than once in my lifetime that a person will come to me and tell me something about what will happen next. It is usually a very specific bit of career advice from someone I know but not well; it is normally not someone I would seek out for counsel. And every time it is the same thing: the person will see me out at a social gathering – often at a gathering in which it was not a given that I would be there! – and announce to me ‘I have a message for you,’ as if they had just listened to a voice mail addressed specifically to me.

When that happens, I know to listen: the person will invariably tell me something that I need to know about what will happen next.

The most recent example occurred right as I started my job search last fall. At a Halloween party, an acquaintance came up and told me the following: ‘You will leave here; there is a move in your future. It will be some place – like Texas – that you’ve never considered before.”

“Texas?” I ask, wondering. “Why Texas?” As a matter of fact, I do have a list of ‘places where I would not want to live’ in my head, and the plains of Texas are high on that list. As far as I am concerned, they call it ‘plain’ for a reason.

At that point in the process, I had not even mapped out what precisely I wanted to do. So I took her comments under advisement.

A month (two months?) later, I had come to the (somewhat surprising) conclusion that I really wanted to go back to congregational work. I love academics, of course, but I realized that I missed that element of transcendence that hovers over the work of a rabbi.

So I called the Director of Placement and told him that I was thinking of returning to congregational work. After he quizzed me about my general background and interests, his first question regarding my search was: “Have you ever considered living in Texas?”

“Texas is fine;” I tell him, “I am open to living in any location.”

As it happened, the place where I went to work was not Texas; it turned out to be a small congregation in a college town in northern New York.

And I love it.

I cannot give you a good reason why this phenomenon takes place; I simply cannot explain it. I can tell you that the Bible records several instances of a person – ‘ish’ – who appears mid-narrative with instructions as to what will happen next. Joseph, for example, finds his brothers after encountering such a person.

The person’s instruction is not necessarily one that makes the road smooth; rather, it is an announcement of what needs to happen next. And it has happened enough times now that I heed its call.

How does this relate to the month of Elul, and the concept of wonder?

Our perception of the world involves the interplay of presence and absence, of articulate speech and of silent wonder. But we do not capture its fullness; in truth, we simply cannot. As Abraham Joshua Heschel writes:

We are able to exploit, to label things with well-trimmed words; but when ceasing to subject them to our purposes and to impose on them the forms of our intellect, we are stunned and incapable of saying what things are in themselves; it is an experience of being unable to experience something we face: too great to be perceived.[1]


I am, of course, an academic as well as a rabbi; I am nearly finished with a PhD; I value highly the work of the intellect. But, as Heschel reminds us, this emphasis on our capacity to name and categorize might at times push us away from apprehending the truth.

There are times when we best encounter meaning when we drop our categories and our names and simply abandon ourselves to wonder.

So, in this month of Elul, stop for a moment and listen; let an ish come and tell you what happens next. Maybe, the ish will tell you, it is time to let go, to forgive, and to move on. That is usually – maybe even always – the larger message to grasp, even as it is conveyed in these small, concrete steps: ‘you will leave here; there is a move in your future. It will be someplace you’ve not considered before.’

As I said: I cannot tell you why it happens, any of it; I can only stand in wonder.

The Jewish month of Elul, which precedes the High Holy Days, is traditionally a time of renewal and reflection. It offers a chance for spiritual preparation for the Days of Awe. It is traditional to begin one’s preparation for the High Holy Days during this month with the Selichot, the prayers of forgiveness. We look to begin the year with a clean slate, starting anew, refreshed. All month, along with others, I'll be blogging a thought or two for each day to help with the month of preparation... I will be blogging here, and sharing #Elulgram photos on the same themes at imabima.tumblr.com. Follow me on twitter @imabima for all the #BlogElul posts, not only mine but others' as well!

Leave your blog Elul post in the linky below!