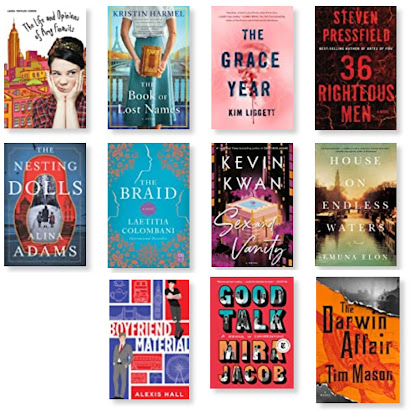 Boyfriend Material by Alexis Hall - Predictable and boring. I actually put it down a couple of times and then went back to it.
House on Endless Waters by Emuna Elon - beautiful, moving. An incredible back-and-forth story of finding one's identity in a story that was really haunting. (Looking forward to discussing this one later this year!)
Sex and Vanity by Kevin Kwan - I really enjoyed the Crazy Rich Asians series, but this one was disappointing. It felt like it wound around for a long time to an inevitable ending that didn't feel worth the wait.
The Braid by Laetitia Colombani - My dad recommended this one and I really enjoyed the intertwining stories of three different women. It took a little while to see how they all would come together, but I really liked how it didn't really beat you over the head with it. Subtle and lovely.
The Nesting Dolls by Alina Adams - I really enjoyed this one! A generational story that was a good read. I liked the insight into the different aspects of Russian history and how generational trauma carries through. And I loved the end.
The Darwin Affair by Tim Mason - A fun, historical crime drama about attempts to silence Charles Darwin. Aside from the interesting period nature of the piece, I thought it was a good reminder that there have often been people who have tried to silence science....
Good Talk by Mira Jacob - WOW. I loved this graphic-novel-memoir about who we are, how we define ourselves, and how society defines us. With gratitude to the friend who shared it with me!
36 Righteous Men by Steven Pressfield - This was interesting. Someone described it as a fantasy-thriller, another called it apocalyptic-murder-mystery. It's set in the future, has an unusual writing format, and there's a Jewish theme too. I think it worked, but I'll be curious to hear how my discussion group likes this one later this year. Also - there's a huge climate change element in this story, and I read it as two hurricanes were bearing down on the Gulf Coast and fires rage in California, so there was that too.
The Grace Year by Kim Liggett - This book was like a cross between The Handmaid's Tale and the Hunger Games....and I couldn't put it down. Teen girls spend one year banished to live in the wilderness. There's a Lord of the Flies element here too, and a whole bunch about female empowerment inside of a patriarchy. It's not for everyone, but it was really good.
The Book of Lost Names by Kristin Harmel - Good, readable story about a French-Jewish woman who ends up working in the Resistance in France during the war. I'll fully admit that a back-and-forth story between past and present does take away some of the suspense in the story, but I still found it compelling and interesting.
The Life and Opinions of Amy Finawitz by Laura Toffler-Corrie - this was a PJ Our Way book that came into our house and I like to read them to see what's going on over there. This one was cute and funny but not my favorite.
July's List
June's List
May's List
April's List
March's List
February's List
January's list
Written by Phyllis Sommer at 4:49 PM