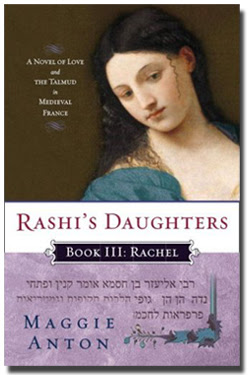 This past Shabbat, my congregation welcomed Maggie Anton, author of the Rashi's Daughters books. She actually has speaking engagements lined up all over Chicago for the weekend, and throughout the Midwest in upcoming days. Since we were her first Chicago stop, though, I got to pick her up at the airport. Why is this exciting? Well, I took her out for lunch and asked her a lot of questions. After all, I have a blog and readers to entertain! I found our conversation to be so wonderful, it was such a delight to meet someone who is so interested not only in the study of Talmud, but in making it accessible to the usually-non-Talmud-studying public.

Our conversation was long and varied, so I tried to take notes as best as I could...

PAS: I read in your bio that you got into all of this because you were a voracious reader. Are you still? What have you read lately?

MA: I wrote the book that I wanted to read. But now I can't just read, it has to take me out of critique mode. Sometimes I treat it like research - seeing how a certain author did certain stuff. I liked Harry Potter

, I really wanted to see how she ended the series. I just read City of Thieves

PAS: Which is your favorite among the books and characters?
MA: I think Book 3 (Rachel)

is the best-written. Not just because I had the most experience but because the editor at Penguin was a real editor. Almost every piece of advice changed the book for the better and made it a better book.

has my favorite characters. I love Judah. I really got into him. I was determined to portray him in a sympathetic light. I don't have a favorite girl.

is my favorite ending. Even today I read it and it brings tears to my eyes. The book had already gone to the publisher when I found new research about Brit Milah. If I didn't know something [if it wasn't available to be known historically], I would default to modern practice. I found out that Brit Milah was done on the mother's lap. The Brit Milah kiddush, the wine cup was held by the mother - she was an integral part of it. In those days, there were 2 parties for a Brit Milah - the mom's family threw the one before and the dad's family the one after. At the first party, the host from the mother's side would announce the name and blessing; he was a male representative of the mother. Rashi finally gets his male grandson and he gets to say the name and he has to make the blessing. What an emotional ending. I really love that ending. Both of my grandsons were circumcised on my lap.

PAS: I read your latest blog post (1/26/2010) about viewing the Talmud as legend or fact. Where would you say you fall on the spectrum, do you have an answer? *Maggie is currently researching 3rd and 4th century Babylonian sages, in particular Rav Hisda and his daughter. From her blog: "In the end, I realized that I was tired of 11th-12th France, that I wanted to immerse myself in another place and time. So for my next historical novel, tentatively titled RAV HISDA'S DAUGHTER, I'm moving back in time to 3rd-4th century Babylonia [Persia/Iraq]. I waited for the new year to let you all know, and I plan to devote most of 2010's blog posts to describing my research, and eventually, my writing process. I expect to devote myself to research for at least a year before beginning to write, although I already have some scenes in mind."

MA: Personally, I'm not sure. It's shocking for me to hear that they might all be legend! In the small research that exists, there are so many contradictions. If I'm going to write this [her next project], I will have to throw out inconsistent information. My characters are the people in the Talmud. I need to have the historicity correct, but how important were these sages? We know that they didn't answer criminal law, only small claims court. There was a whole other court system in place (in Babylonia). It's clear that they didn't have power. What I haven't decided is - How important do I make them? Did people see them as fruitcakes who have no influence on their lives? There are so many pieces.
(Ima's note: This became a much longer conversation about research and Talmud. I couldn't keep up taking notes and I wasn't recording the conversation. Suffice it to say - I had a great time!)

Regarding the research she's doing: A lot of the information I'm using has only been published or available in the last 20 years. Some of it has only been translated into English in the last 10 years.
Ima's note: This was also a really interesting conversation - how Maggie finds her materials, who is doing the research, how it gets disseminated and how she accesses it. She said that now the scholars have heard of her and what they typically say is: "my wife loves your books!" - and then they're willing to help her out.

I found Maggie to be incredibly passionate about the work she's doing, and incredibly passionate about spreading the concept of Talmud-learning into the Jewish world, in particular to the Progressive movements and to women. She spoke non-stop for almost an hour to my congregants, who sat enthralled. She almost never mentioned her books specifically, but instead spoke about Rashi and about Talmud and its implications for us. It was remarkable, and I'd love to give her free reign to teach for a whole day (I'll work on that for future events). For me personally, I loved hearing how she explained Rashi and the need for his commentary on the rather, um, shorthand (cryptic!?) language in the Talmud. It's so much fun to hear how someone else teaches something. I took a lot of mental notes for my next Talmud class! 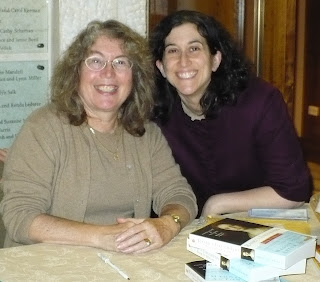 Thanks, Maggie! I'm looking forward to your next visit (and your next book)!
Written by Phyllis Sommer at 10:04 PM

Ooh, I've recently just finished reading this series, so it was great to read this interview - how lucky you and your fellow congregants were to have her visit!

Wow -- what great insight you've shared with us. Thanks so much!!!!!

What a wonderfully inspiring post. I love the Rashi's Daughter's series.

You did a nice job of highlighting our "very long" discussion over lunch. Thanks so much for hosting me at Am Shalom.