Carrying the Torah with Pride

Today, I was greeted with this news about the arrest of Anat Hoffman, one of the leaders of Women of the Wall and the Reform movement in Israel.

From the Facebook page of Women of the Wall, this press release:

Jerusalem, Israel – One of the leaders of the Reform movement in Israel and Women of the Wall (WOW) was arrested for holding a sefer Torah during a Rosh Chodesh celebration at the Western Wall.

Women of the Wall (WOW) gathered this morning for their monthly Rosh Chodesh services at 7 a.m. on the women's side of the Kotel. Anat Hoffman, with a sefer Torah in her arms, led the 150 women strong prayer group in song as it continued its celebration in a procession toward Robinson's Arch.

Moments after leaving the Wall, police confronted and blocked the procession and began menacingly to attempt to remove the Torah from Hoffman's arms. Hundreds of participants watched in shock and distress as the Torah was jostled by police.

Hoffman was detained under the pretext that she was not praying according to the traditional customs of the Kotel. Hoffman was taken into police custody and interrogated for five hours. Police claim that holding the sefer Torah is against the Supreme Court ruling. Police are currently consulting with Attorney General to determine her charges.

Anat and her lawyer stated that the act of carrying a Torah is not mentioned in the Supreme Court ruling. Women of the Wall stood in solidarity with Anat outside of the Kishle Police Station near Jaffa Gate. Hoffman was released from police custody and banned from the Kotel for 30 days.

The arrest of a woman on the first day of the month of Av is a harsh reminder of the price that Israeli society may pay for its religious intolerance and fanaticism. Tomorrow at 13:30, WOW will lobby at the Knesset for civil equality and pluralism at the Kotel, emphasizing the Wall as a holy site for all streams of Judaism and advocating for equal rights of women at the Wall.

This morning at OSRUI, Torah was read all over camp. Our readers were women and men. The Torah was carried by rabbis and teachers, counselors and staff - male and female. The Torah for which Anat was arrested is the Torah from which we teach and learn each and every day. The country that allowed for the arrest of a woman carrying the Torah is the country for which we pray for peace and safety each and every day.

I'm torn, truthfully. I consider myself an ohevet Tzion, a lover of Zion. But I am intensely and incredibly hurt by this action taken by the police in Jerusalem. (I do, however, smile a little at the 30-day ban from the Kotel proscribed for Anat - which ends just in time for Rosh Chodesh Elul. Reminds me of the wise judge in the story of the sukkah who gave the owner 7 days to take it down...)

For now, I will continue to wait and see what happens in the land I love. I will fill my days and world with Torah and I will teach anyone who will listen about my own beliefs about equality and plurality and fairness and right.

And I will continue to carry the Torah with great pride. 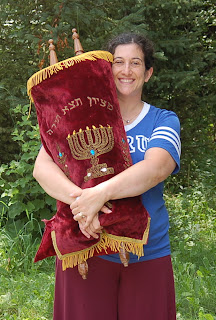 Support Women of the Wall: on Facebook, or at their Website.
Written by Phyllis Sommer at 2:41 PM

Thank you for carrying it for all of us...just as we stand with all those who celebrate Rosh Chodesh at the Wall