No one ever takes pictures of me while eating.
(Thank goodness.) 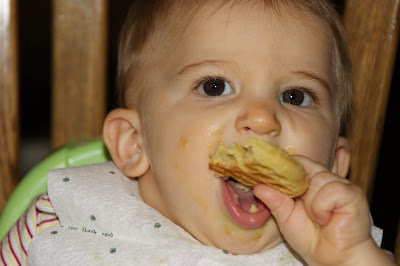 I'm just not nearly as cute as this. 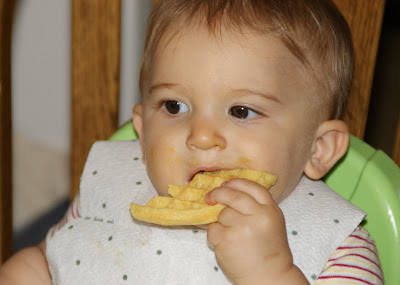 When do we stop being adorable for making a mess?
Of course, it's the month of Elul...so I'm thinking about forgiveness.


Dr. Rachel Naomi Remen, one of my favorite writers and teachers, had gone to hear a well-known rabbi speak on Yom Kippur, that most holy of days, and she was expecting to hear about God’s forgiveness. "Instead," she writes, the rabbi "walked out into the congregation, took his infant daughter from his wife, and, carrying her in his arms, stepped up to the bimah or podium. The little girl was perhaps a year old and she was adorable. From her father’s arms she smiled at the congregation. Every heart melted. Turning toward her daddy, she patted him on the cheek with her tiny hands. He smiled fondly at her and with his customary dignity began a rather traditional Yom Kippur sermon, talking about the meaning of the holiday. "The baby girl, feeling his attention shift away from her, reached forward and grabbed his nose. Gently he freed himself and continued the sermon. After a few minutes, she took his tie and put it in her mouth. The entire congregation chuckled. The rabbi rescued his tie and smiled at his child. She put her tiny arms around his neck. Looking at us over the top of her head, he said, ‘Think about it. Is there anything she can do that you could not forgive her for?’ Throughout the room people began to nod in recognition, thinking perhaps of their own children and grandchildren. Just then, she reached up and grabbed his eyeglasses. Everyone laughed out loud. "Retrieving his eyeglasses and settling them on his nose, the rabbi laughed as well. Still smiling, he waited for silence. When it came, he asked ‘And when does that stop? When does it get hard to forgive: At three? At seven" At fourteen? At thirty-five? How old does someone have to be before you forget that everyone is a child of God?’"

Look at that shayna punim.
May his sweet face always be a reminder of his inner spark of the Divine.
And may we always be able to see that sweet inner spark in everyone we meet. 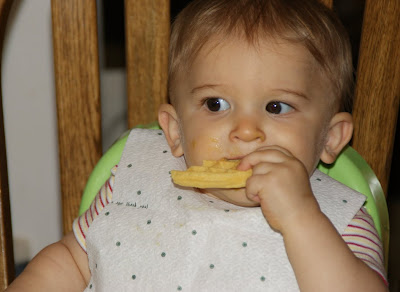 The Jewish month of Elul, which precedes the High Holy Days, is traditionally a time of renewal and reflection. It offers a chance for spiritual preparation for the Days of Awe. It is traditional to begin one’s preparation for the High Holy Days during this month with the Selichot, the prayers of forgiveness. We look to begin the year with a clean slate, starting anew, refreshed. All month, I'll be blogging (except on Shabbat) a thought for each day to help with your month of preparation... Most of my #BlogElul posts will be over at my other blog, rabbiphyllis.blogspot.com, so feel free to visit me there or follow me on Twitter to read all my #BlogElul posts and others' posts too!
Written by Phyllis Sommer at 6:00 AM

How beautiful. Both the punim and the story.

I love your blog and have posted some of your comments on my blog. But right now I want to ask your help in getting the word out about this
new project.

"Jognau, the Dreamer” is an original story by award winning author
Sylvia Rouss and Raoul Wallenberg Prize recipient Ambassador Asher
Naim, illustrated by Dawn Phillips. The animated version is narrated
by Geoffrey Bennett and produced by Jordan Rouss. The story can be
viewed as an animated version, &/or downloaded as both a book and a
coloring book. All are free.