I've been on Twitter for a while now (since February of 2008, to be exact...way before Oprah) and I really like it. I know that the rest of the world was slow to pick up on it, but it has been a lot of fun for me for a while now. I've tweeted off and on...sometimes I go for a while without tweeting, but usually I have something to say.

And even though I'm not one of the JTA's most influential Jewish Twitterers, I still have been enjoying tweeting Torah for a while. Here is today's set of #Torah tweets, about this week's parasha. (while it doesn't matter much, you should read from the bottom up - that's the order in which I posted them.) 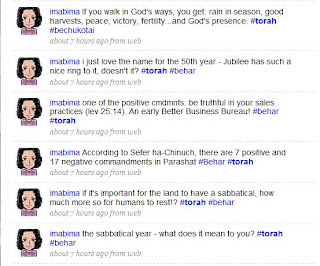 My other favorite #hashtag (that's how you sort tweets) is #whatrabbisdo - other rabbi friends are having fun posting what they do too!

Why do I like Twitter? It started out as a little bit of a private space for me, where no one really knew who I was. But that all changed when the whole world came on Twitter (and it's not like I was ever secretive about it) and now it seems to be the thing that the teenagers make fun of and the older folks are trying out. Now I like it because it seems to be the best way to keep up with whatever is going on in the world...faster than any other website to get me to all the news! Interestingly, however, most of the news lately has been about Twitter itself! Which seems silly and counterproductive. And today there was a whole piece on CNN about how maybe, just maybe, Twitter is "so 5 minutes ago." I guess we'll just have to wait and see!

Do you Twitter? Why?
Written by Phyllis Sommer at 12:01 AM

Shouldn't that read:
"Do you Tweet? Why?"
But if you want Twitter to be a verb, why not.

Love following all the bloggers I know on Twitter. I get a lot of technical and design information/inspiration via Twitter. And I've met a number of locals, because I've gone to a "TweetUp." Have you met new people via Twitter? Tweetups are really cool. People who are a bit shy in person can be awesome Tweetists. And vice versa.

Wish I had more time to do parsha.

It doesn't matter if it's "so 5 minutes ago" if it works for you. Seriously, who cares what CNN says, of all news channels, anyhow?

this is lame, but the only reason I haven't gotten into twitter is because I don't have unlimited texting. That stuff falls under David's job description, and I haven't asked him to change the plan yet. If I was getting tweets from everyone else, I'm sure I'd be O-B-S-E-S-S-E-D. Yeah, like I need another obsession. :)

leora - i did say "do you twitter" because i find that non-tweeters don't "get" it when i say "do you tweet?" besides, that sounds vaguely inappropriate to me:-)

I tweet, and it's mainly for family interaction. I'm also on Face Book for the same reason, and also to promote my blog.