This week's Haveil Havalim is over here.

My Bubbie is almost 95 years old. She doesn't bake any more, but when she did, she had some great recipes, like carrot cake and mandelbrot. The other great thing that she made, possibly the greatest of them all, was her coffee cake. She made a yeast dough cake that was similar to "monkey bread" - each piece was rolled in cinnamon-sugar and (sometimes, when I was lucky) nuts, and then squished together to make a pull-apart cake. Truly spectacular. So good that my parents shlepped some to me in Israel, so good that I'm pretty sure they shlepped some to Cincinnati when my first child was born, so good that I remember digging into one on a plane ride with my aunt when I was 8 years old.

So good that I've never ever ever tried to make it.

Plus, the recipe calls for scalded milk, which scares me.

So I had a bit of a yen for coffee cake. Something cinnamony and cakey and delicious.
And I did NOT have a yen to deal with yeast dough.

So I went to my trusty King Arthur Flour Baker's Companion, which always comes through for me with the best recipes and I picked out the Classic Cinnamon-Nut Coffee Ring to make on Sunday morning.

I was NOT disappointed.

Recipe, slightly modified by me:

Cake
5 tablespoons (2 1/2 ounces) butter
1/3 cup (2 3/8 ounces) vegetable oil
1 cup (7 ounces) sugar
3 large eggs
1 teaspoon salt
1 teaspoon ground cinnamon
2 teaspoons vanilla extract
2 1/4 cups (9 1/2 ounces) unbleached all-purpose flour
2 teaspoons baking powder
1/2 teaspoon baking soda
1 cup (8 ounces) sour cream (I used vanilla yogurt, because that’s what I had)
Filling
1/2 cup (2 ounces) chopped walnuts or pecans (didn’t feel like dealing with children who say silly things like “I don’t like nuts” when they’re just crazy.)
1/2 cup (3 ounces) chocolate chips (I really didn’t want the chocolate to mess with my cinnamony goodness)
1/2 cup (3 1/2 ounces) sugar
1/2 cup (2 1/4 ounces) unbleached all-purpose flour
1 teaspoon cinnamon
3 tablespoons (1 1/2 ounces) butter, melted
Preheat the oven to 350°F.
For the cake
In a medium-sized mixing bowl, beat together the butter, oil, and sugar until fluffy. Add the eggs one at a time, beating well after each addition. Add the salt and flavorings and beat until evenly incorporated.
In a separate bowl, whisk together the flour, baking powder, and baking soda. (If you let your kids do this part, note that they should keep their little fingers out of the mixture, ok?) Add the flour mixture to the butter-egg mixture alternately with the yogurt, mixing on slow speed just until blended.
For the filling
In a small mixing bowl, combine the nuts, chocolate chips, sugar, flour, cinnamon, and butter. 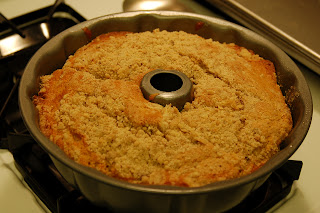 Bake the cake for 45 to 55 minutes, until a cake tester inserted in the center comes out clean. The smaller (9-inch) pan will take the longer time to bake. (By the way, my 10-inch pan took almost 55 minutes too.) Remove the cake from the oven and let it cool in the pan for 15 minutes. Turn out onto a wire rack. Cool it completely, then sprinkle with confectioners’ sugar before serving, if desired. 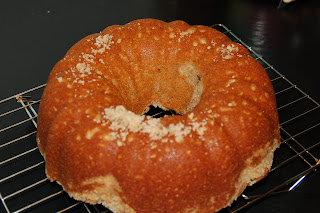 Why should you put all the filling in the middle? Read the directions very carefully. It says to put the rest on the top, and then you flip it OUT of the pan. Guess where most of that cinnamony-goodness ended up? Yep, on my counter top. Under the wire rack conveniently placed there. Nonsense. I am not going to waste all that deliciousness again. See how in this picture (above) it appears that there's some sprinkly stuff on top? That was me trying to save some of that fallen-off cinnamony-goodness. {{{Sigh}}} Live and learn.


Huge hit.
I think that when I'm a Bubbie (God willing), this is the cake that I'm going to make for my grandchildren. It's that good.
Written by Phyllis Sommer at 10:21 PM

Wow, awesome, keep it such kind of hard work.

Did you send it to KCC?