In our usual annual tradition, we have started to make a lot of hamantaschen.

In the course of one baking session, we used one batch of Aunt Dora's dough, one batch of chocolate dough, and a double batch of cream-cheese dough (that's my favorite). It was about 150 cookies. Yum! The chocolate and cream-cheese recipes that I used this year came from Marcy Goldman's cookbook A Treasury of Jewish Baking.

Hamantaschen are, as you might know, the three-cornered filled pastries that remind us in some way of The Bad Guy from the Purim story, Haman. Some say they are reminiscent of his hat, his pockets, or his ears. Either way, they're a fun and delicious treat for this holiday!

So this year, I have started thinking more and more about what "counts" in the field of hamantaschen. After all, there's no list of "rules" for making them -- and over the last few years, perhaps thanks to Pinterest, hamantaschen creativity is off the charts!

So this year, inspired by this post from Kosher in the Kitch, I decided to try my hand at hand-pie hamantaschen, also known as Pop-Tart Hamantaschen.

I picked up a package of refrigerated pie dough (careful, some of the supermarket brands contain lard) and let it come to room temperature. Then I rolled them out into the round circles (meant to make pies of course) and sliced them like a pizza! 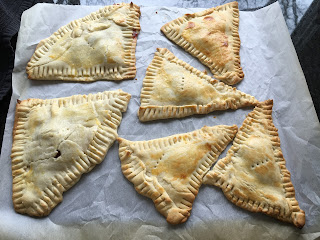 I filled up half with chocolate spread and half with strawberry jam, crimped the edges, brushed with a little egg wash, and baked.

Then we added some glaze -- about a cup of powdered sugar and a tablespoon of milk made a nice sugary topping. Then I had a little helper who might have gone a little overboard with the blue sugar... 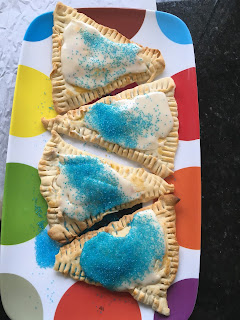 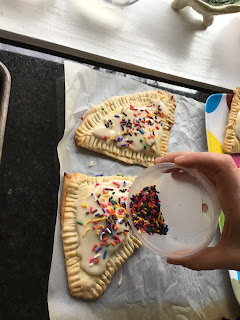 I thought they were delicious!
Next time I will make them slightly smaller (it will make more from a batch of pie dough), and perhaps mix up the chocolate and strawberry! 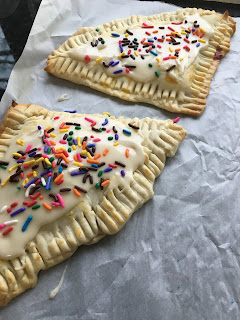