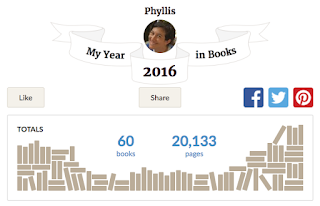 This was a great year for books, and here's the list of all that I read. I started to put stars next to the ones that I would recommend, but then I found myself starring a lot of them so I skipped that plan. A lot of good books here...(a few that I would probably skip, so you can privately message me if you want to know which ones to skip - I hate to malign an author publicly.)


So many great books this year. I rarely re-read any books any more (there are so many more that I want to get to!) but I'm considering re-reading When Breath Becomes Air, so I know that was my top book of the year. If you haven't read it, grab a box of tissues and plan to stay up all night reading. I also really liked the little series of books I read between 54-58 -- this was my winter break attempt to get to 60 books (nailed it with a day to spare!) and it was a really good run of book-in-a-day books.

Books that are on my "to read" list (some inspired by this great feature in the New York Times)
What else do you think I should read in 2017?
What are you going to read? What was the best book you read in 2016?

I keep track of my books on Goodreads - follow me there.