Dealing with Halloween...Works for Me 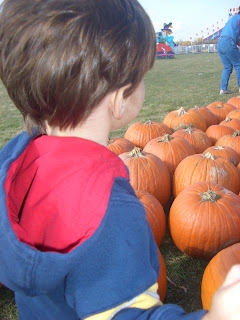 The holiday of Halloween brings me a bit of stress each year. On the very basic level, I'm just not a fan of this holiday that has become so much bigger in the last 5 years. I remember a few weeks of build-up, some homemade costumes, a party in school, and maybe a party at someone's house...and maybe not. Pumpkin carving and candy apples....
But now Halloween is about decorations and lights, months of build-up, party after party...trick-or-treating in town, all other activities cancelled for the night...at first I thought it was something new here in Chicago, but I'm realizing that it's all over.
My first year here, I arrived at my son's daycare at about 4:30pm on Halloween. The daycare was open daily til 6pm, and my son was usually one of the first picked up at 4:30ish. On this day, he was one of the last 2 kids left...at 4:30pm. When I asked what was going on, the teachers told me that most of the parents took off work early to pick up their kids early to take them trick-or-treating. Just a few weeks earlier, on Erev Yom Kippur, the holiest Jewish holiday, when the center closed at 3pm, almost all the kids were still there at 3pm and the teachers told me that many were actually late on that day. ?????
So all this rant is leading to my issue....how to make Halloween as low-key as possible in our house. Not to mention my personal concerns about Halloween as a pagan holiday with values that don't necessarily coincide with my own, is also the need to not let something like this become overwhelming to my family.
Here's my recipe for a "low key" Halloween:
- No decorations. We spend a lot of time and energy on Sukkot (see here and here) and this is our fall decorating fun. Some years the two holidays coincide. Some not. Either way, I will continue to stand firm on this one!
- Pumpkin carving can be a fun fall activity, sometimes we try to do it for Sukkot or even after Halloween for Thanksgiving. This year I carved a flower! But I resist and resist. I try really hard to get out of it.
- I don't make a big deal about the costumes. We often recycle last winter's Purim costume or spend just a little bit of time talking or buying it. We have a little stash of dress-up stuff anyway, so we can pick and choose if we want...This year my son earned all the money himself for his costume since he wanted to spend far more than I wanted to spend.
- We eat a normal dinner, and trick-or-treat only on our own cul-de-sac. That's enough for me! (Plus it's cold and gets dark early, thankfully)
- We look over the candy, eat a piece or two, and then give all the rest to the kids at children's hospital.
- We're not giving out candy this year, ourselves, we're giving out bouncy balls.
- I think this is the year to introduce the UNICEF boxes to my son.
- When it's over, it's over! I can't wait.
Does anyone out there feel that Halloween has changed over the years and become more overwhelming?
See more Works for Me Wednesday at Rocks in My Dryer
Don't forget to visit my Giveaway...only a few days left!
Written by Phyllis Sommer at 9:22 AM

Email ThisBlogThis!Share to TwitterShare to FacebookShare to Pinterest
Labels: halloween, works for me wednesday

You are so right - I wrestle with this, as a rabbi, all the time, and I am sure that it will only get worse once I am a mother. Unfortunately, Halloween is no longer a viable holiday, as I blogged about this evening. Guess I will just focus on it being a day like any other... :)

I have good friend who impressed me with what her family does. They take their kids to the local grocery store, let each child fill up a bag of Brachs candy, and then they all go to the bowling alley and have a fun family night. I really admire them for standing firm on their principles and finding a way to turn it into something the whole family gets excited about.

My dad says that Halloween has become the new Christmas. Why the need for all the decorations and prep time?
Good blog ImaBima
~Liz

I kept Halloween really low key this year. We have a lot going on, and I just didn't focus on it even a little bit. My oldest son (8) said he didn't want to go trick or treating, and that was fine with me. Like you, I think we'll take the two younger ones around the cul de sac, but that's about it. We only bought one new costume (it was on sale for $9 and I thought it would be a nice addition to our dress up box), and the youngest one will wear a cowgirl costume that is already in the dress up box (picked it up at 90% off last year at Target).

I might have to ask around at our church if we could have something more like an All Saints "party" next year.

We wrestle with this ourselves. My husband is staunchly against anything Halloween, but has relented enough to let me take the kids somewhere in town to go trick or treating (living on a farm, the cows don't do trick or treating). We don't decorate, and the costumes are either homemade or not fancy. The kids have fun anyway. It doesn't seem more of a big deal to me now than it did when I was growing up, but I grew up in the city and people out here in the country just don't go door to door (it'd be a LONG walk!).

I hear you with the decorations.
When did this happen?
On our street it really does look like Christmas with all the lights and blow up lawn decorations. I just don't really get it.
Leo has enjoyed the spooky spiders, carving the pumpkin and is quite excited about trick-or-treating. I'm just trying to keep up. :)
THanks for sharing your thoughtful ideas here.

Yes, I agree with you. I think it stems from a misplaced search for meaning and, literally, spirituality in our lives. And so the merchandisers come to the rescue, as per usual, and extend the buying season ad infinitum. I overheard that more decorations are now sold for Halloween than any other US holiday. My daughter is ecstatic with the frivolity of it (and I love to see it), but I do not feel inadequate for having failed to carve a pumpkin this year.We will enjoy the beautiful clear sky and cool weather. We will enjoy as I wish we could enjoy every day!

Oh yes, I so agree with you I'm in the UK and Halloween has been getting much bigger here over the last few years but this year in particular we've been carried along on a wave. Here we are 31st Oct and I've just had my little party for the children here but there have been 4 others my daughter has attended in previous days and some of my minded children have some still to go to as each activity they go to has its own party. We're all shattered and next year I'm opting for a harvest supper in October and bonfire night (5th Nov)if I can stand firm!

ooh, the blowup things are another part of this...i forgot about those, bella! there is a house near us that has about 50 of them. (then again, they have another 50 at christmas. do they rent them?)

thank you all for your thoughtful comments. i'm glad to know i'm not the only one who wrestles with this...

Good for you that you keep it low key...who needs these super pagan holidays anyway :)

We also keep it very low key in the Nest :)