My beautiful baby girl turned one while I was in Israel. (Yes, I'm over the guilt thing...)

One year ago...I was waiting eagerly for my water to break...that is what happened with each of my first two pregnancies, and I went to bed every night expecting it. But not so with my girl. She really wanted to stick around inside. The doctor and I had other ideas and we induced labor on February 16, disturbing her cozy little nest.

And it only took her about 3 months to forgive me.

But finally, at 3 months, it all clicked. She forgave me for her induction into the world! She started to take a bottle (good thing, too, because that was the end of my maternity leave - I even considered extending it!), she took a pacifier and sometimes her fingers, and she learned to roll over (even though the doctor said it was a fluke). Basically, she turned into a wonderful baby! She started to nap, (she didn't sleep so well at night but I'll take the blame for that one, I kept going in so she wouldn't wake her brothers) and she started to smile and interact happily with the world!

Now at one, she's displaying a nice little personality and I can't wait to get to know her even better! This morning, she woke up at 6am and rather than cry she called out "Daaaadddeee!!!" which made us both giggle. Her inflection was perfect, a sing-song just like her big brothers.

She's a climber, and she loves music. She dances and giggles. She still loves to sit in the sling, although now she can pull my hair. She'll eat almost anything you put in front of her but never touches the french fries (seriously, maybe she's not my kid?). She pushes her brothers out of her way when she wants something and she wants to be just like them. She absolutely adores my blackberry and any other gadget...the tv remote, the video game controller, anything.

When I came home, I did this little photo session to capture a one-year-picture. (She was awfully neat with the cake shots so I wanted something else. I had this great dress...) 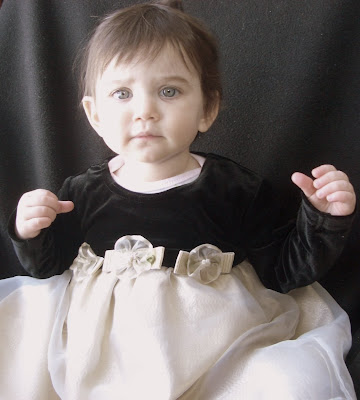 Happy belated birthday, Yael!
See what other reflections folks are turning up today...
Written by Phyllis Sommer at 12:52 AM

as always, her eyes are just gorgeous! she doesn't look so sure about that dress, though ;)...

What a sweetie--I love that dress, too :)

What a beautiful dress ! And a beautiful little girl, of course ! Happy Birthday ... I love first birthdays !! So much fun !!

oh so sweet!I know you had a great time on your trip too!!

Those eyes. She is such a cutie. Happy birthday, baby girl.

she look soooo serious! And precious all at the same time. Good picture.

She is so cute. SO beautiful.

Happy Birthday, Little One! So beautiful.

She has the most gorgeous eyes! Happy birthday!

She is just too gorgeous for words! And that dress is adorable!

such a precious girl! She is darling. Beautiful dress, too. Happy Birthday, Yael!

What a wonderful recollection! I am so happy for you all. She is such a beautiful angel - and she has two wonderful parents.

Thanks for taking good care of my brother, by the way!

PS - You've been tagged! I really like this one. Come on by to see what it is :)

She is so sweet and beautiful! Happy late birthday to her!! My heart just melts looking at that angel-face.

Beautiful! I love the dress!

OMG she is stunning!!!