My dear friend and pie-maker, FrumeSarah, said it best:

The way we approach the Exodus story is bibliodrama at its finest. In each generation, we turn the story over and over, looking for ways to insert ourselves into the story.
Rabbi Nachman of Bratzlav taught that “the exodus from Egypt occurs in every human being, in every era, in every year, and even on every day.”
How do we understand the Exodus? And what if we were to experience the Exodus in our own day, in our own time? And how would we transmit the story? We’ve moved beyond tablets.

Oh yes we have.
We're Tweeting the Exodus, and let me tell you, it's quite a ride so far!

I woke up this morning to these alerts in my Google Reader: 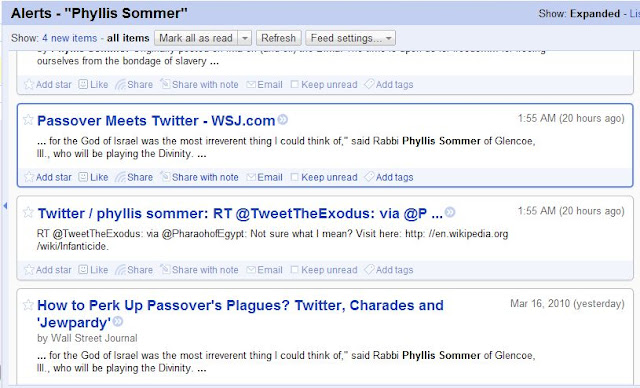 It's like a dream - I can't believe my name popped up on the Wall Street Journal website. It's a great article, even though I think that the point of TweetTheExodus is a little bigger. This isn't just about fun, but it's really about creating something new, about expressing ourselves in a way that speaks to our generation, and find new meaning in the story.

I'm proud to be a part of this experiment in telling an old story in a very new way, and I think that it has such a great potential. So far, as I write this, there are 780 793 (it changed while I was writing this post!) followers of the @TweetTheExodus account, and I really believe that's a lot of people thinking about the ancient story of freedom - and for many of them, they might not have thought about that story at all, or they might not have related it to their own lives at all.

So join me and a bunch of my friends and colleagues and tweeps as we tell the story, live the story, build the story, feel the story....we ARE the Children of Israel, and we are going forth from Egypt...from darkness to light, from slavery to redemption, from the narrow place of Mitzrayim to the wide open spaces of our own potential and possibility.

And it's going to be amazing!
Written by Phyllis Sommer at 10:46 PM

This whole movement is very intriguing. I hope it goes as well as you all have planned. Congratulations on being quoted in the WSJ, too. That's amazing! :)

Since Eli is obsessed with the 7 plagues, do you know where we can purchase the "$15 Bag of Plagues" mentioned in the WSJ article? I think it would be a huge hit at our house and would help make the Exodus story alive for us, too.