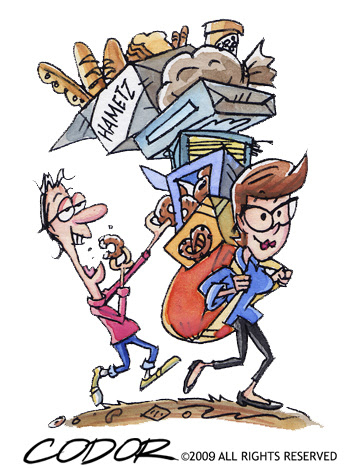 The story is wrapping up at TweetTheExodus - come by for the final words....


My newest favorite Pesach joke:
There once lived a king who had an favorite advisor. The other advisors objected because he was a Jew.
The King accepted their argument and ordered him to convert. The advisor obeyed the king, and converted along with his whole family. But it made him so depressed and despondent, that he went to the king and said, "I'm a Jew. I can't change who I am. Do whatever you want with me but I've gotta go back." The king had no idea that his advisor felt so strongly, so he told him to go ahead and be a Jew again. "Your counsel is just too valuable to me to lose." The advisor, overjoyed, ran home to tell his wife. "We can be Jews again!" he shouted. His wife looked at him and said, "Couldn't you have waited until AFTER Pesach?"

Some more jokes:
Why did the matzah quit his job? Because he didn't get a raise.
Who is behind Pharaoh's evil empire? Darth Seder
What did the Red Sea say to the Jews when it parted? Nothing, it just waved.
What's the difference between Matzah and Cardboard? Cardboard doesn't leave crumbs on the rug.

(Many adapted from Bangitout's Seder Sidekick)

Here's a great video from G-dCast

Some of my old Passover posts, worth a visit:
Great Passover Books for Kids
Haggadah Wordle
YouTube for Pesach
Matzah Brei Variations
Misc Tips and Tricks (including my other favorite Pesach jokes)
Award-winning Seder Poetry

May you have a zissen Pesach, a sweet Passover, and may your celebration bring joy and freedom.
Help end modern-day slavery with Free the Slaves.
Written by Phyllis Sommer at 1:42 PM

Email ThisBlogThis!Share to TwitterShare to FacebookShare to Pinterest
Labels: passover