I must admit, I was so excited to get the new Shalom Sesame DVDs in the mail for review. I loved loved loved those days at camp when it rained (or, as I now know, the counselors were hadn't written a lesson plan) and we were allowed to watch the a Rechov Sumsum video, the Israeli version of Sesame Street. I loved seeing these videos, which were clearly created for American children to learn about Israel, especially since I thought they were written for Israeli children. I loved that we watched them at camp, because I thought this was so much better than Hebrew School at home. (By the way, that Wikipedia article I linked to up there is interesting and explains a lot about how the shows were produced, etc. I didn't know that the show was actually known as Shalom SumSum in the edition that I watched. These DVDs are available, by the way, on Amazon

The new series came out just recently. Called Shalom Sesame, they are specifically designed for American children, bringing aspects of Jewish life, holiday stories, Hebrew alphabets, and Israeli culture. Lots of celebrities are slated to be involved in these episodes as well. (Publicity materials indicate that there will be games and activities on the website, but they're not live yet. *I received free copies of these DVDs for review purposes.)

The two episodes that we received were the first one, "Welcome to Israel" and the Chanukah program "The Missing Menorah." Both feature Grover and Anneliese van der Pol, an actress with whom I wasn't familiar. I plunked my children down in front of the TV, and they were very excited for a daytime television treat. It started well. We got through the opening credits/singing, which ends with children shouting "Shalom Sesame!" and Yael promptly responded "Shalom Sesame!" We were off to a good start, I thought. 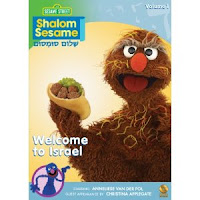 Sidenote, with full disclosure: My children don't watch Sesame Street. I grew up on it, I love it, but for whatever reason, it doesn't hold my children in its thrall. Disappointing to me, but how can I force them to watch things they don't care to see? So they're not knowledgeable about Grover and his ways. Do your kids watch Sesame Street?

Things declined from there. Anneliese is on a plane going to Israel and she just wants felafel. My children know what felafel is. Do most American children? There's no explanation of it and many of the terms are completely undefined. I think I'd feel confused if I were someone who did not know much about Israel.

There were cute cartoon sketches reminiscent of all the Sesame Street episodes I've seen, and a number sketch with the Count at which the "number of the day" was chosen, with counting in both English and Hebrew - but not much reinforcement of the Hebrew words for the numbers. There was also a letter cartoon section, with some words that started with "yud."

Sam's favorite part (and he is the one who really didn't like the whole video) was when a little boy sleeps over at a friend's house. I thought it was particularly interesting that one little boy was dati and one little boy more secular. He talked about washing and about the friend's mom providing him with special food. How did these little boys get to be friends and why did the show spend so much time highlighting their differences? ("His mom got a special cup for me to wash my hands before I eat." - a statement like this is totally confusing to American (non-frum) children who are required...at least in my house...to wash their hands all the time before and after eating.)

So when we went to watch the Chanukah video (a few days later), Sam preferred to play his handheld video game while Yael watched. This one was about the holiday of Chanukah, obviously, but only slightly explained what sufganiyot are. The "lost menorah" took about 45 seconds to find, during which the characters all sang a song that wasn't very memorable. The brachot weren't said, and the story of Chanukah was told in a pretty simple and often confusing way. The number of the day was 8, but I'm only now realizing why, since a direct connection wasn't made.Overall, even Yael was a little disappointed with this one.

So....on the upsides: the video quality is great. The colors are bright, the cartoons don't look dated, it's fun to watch and to have Hebrew on the TV in our house. But for learning something? I don't think that my kids got a lot out of these videos. The PR materials did call the series "edu-taining" and I think it's a little light on both education AND entertainment. Maybe this is why the regular Sesame Street show is 1 hour long - to enable them to have many different segments all in the same show. Perhaps they tried to do a little too much.

What worked for me in the original series was that even though they were technically driven toward small children, even the older kids (like me) could see them at Hebrew School or camp and enjoy them. I think these are too focused on the 3-6 year old crowd to be pleasing to older children. Some of the gags were definitely funnier for the parents than the kids. And Grover does do his waiter bit, which was always a favorite of mine. It went totally over my kids' heads.

Sigh. I really wanted to LOVE these videos but I didn't.

So I'll leave it to you...I'm giving away both DVDs, just leave me a comment here and you're entered to win!

I'll do a random drawing next week to pick the winners. You have until next Thursday night, October 21st. You can let me know what you think!
Written by Phyllis Sommer at 5:42 PM

I was aware, even at the time, that the original ones weren't for Israeli kids. Don't know why.

One of my three was really into Elmo, for reasons FAR beyond my understanding, but otherwise not so into the show.

I still love it, BTW.

My triplet two year olds LOVE Elmo. we have the old Shalom Sesame DVDs but they are just..so..old. The sound and image quality are so-so and the content doesn't really work for toddlers. SOOOOO, we would LOVE these new Shalom Sesame DVDs. Sesame Street is the only TV/DVD we let them watch (along with some Baby Signing Time DVDs). I'll send you a link of my little ladies watching Elmo. -ravyoga@rabbiheatheraltman.com

Check out the youtube link to see my girls mesmerized by Elmo. and the older want wants you to be sure to know that she's only watching to spend time with her sisters.-HA

Oooh, pick me pick me! -Lindsay

My kids love Sesame Street and the old Shalom Sesame episodes we have on DVD. I'd love to have these for my 19 month old and nearly 3 year old!

I'd love to see these! I never saw the original show.

I've been reading about the new characters on FB. It sounds pretty cool. My kids (even the biggest ones who are 8) think it's cool.

It was Rechov Sumsum, if I remember correctly! When my kids were really little, we used to love to check these videos out of the local library. The fact that or old library even had those videos was was a special treat for us seeing as how there were so few Jewish families in our old town! I always loved watching it with the kids, Bo bar vaz, vaz, bo bar vaz, vaz.... I am a HUGE Sesame fan, so is my girlie. The boy, not so much....

my kids are obsessed with sesame street. Throw in a little Hebrew and they'll be mesmerized. Yeah, I'll feel like you do and wonder about the educational value, but I have a feeling my kids will be happy. So, pick me pick me! :)

Can we get the more educational and entertaining Rechov Sumsum anywhere?

Thanks for the insightful review. I will not be buying these for my grandies, even though they love Sesame Street.

I am not entering to win...lol.

My little one loves Sesame Street, and I think these would be great for her. Any opportunity to bring Jewish culture and "learning" into her life is a win-win for me especially since we don't live in a very populous Jewish area and have limited opportunities for children at our synagogue.

Love Rechov SumSUm! im 22 years old and still laugh and sing along when i watch with my younger brother! we have some VHS recorded off the tv from 20 years ago!! we love the passover one with sarah jessica parker! id love to see the new ones!! keep up ur amazing blog!
-tova

I've been looking forward to the new Rechov Sumsum for ages, but I'm so glad you gave me a heads-up that they might not be as fabulous as I've imagined. Still, have them I must, since DVDs for Jewish kids are not exactly falling off trees. Wish there was a quick way to compile the "good" clips (snippets with real Jewish content, spoken Hebrew, timeless songs, etc.) from each series into one, decent DVD!
Thanks for the review and the giveaway idea!

My daughter is in love with Sesame Street. I hope you'll choose us!! :)

My son loves sesamae street and just started in a jewish school. I would love to have these dvd's for extra learning at home.
Thanks