I have long admired these necklaces that I've seen on other people's blogs, and adorning the necks of friends. (I've entered more giveaways than I can remember.)

But none of them really spoke to the way I think of my children and myself as their mother.

When we chose our children's names, I was adamant that they be Hebrew names. Not just Hebrew in addition to their English names, but that they be pretty much the same in both languages.

We did pretty well, only one middle name that isn't the same in both languages.

So I wanted something that spoke to that for me. I searched for "Hebrew hand-stamped necklace" and found

And then I ordered this: 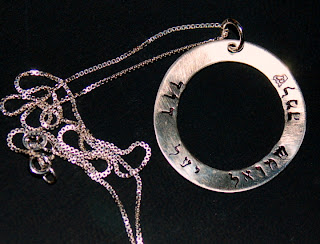 Isn't it beautiful? (And even though her prices seem to have gone up, they still seem pretty reasonable.)

I ended up ordering some beautiful necklaces for some lovely B'not Mitzvah girls as well, which they loved.

It's my favorite thing to wear.
Written by Phyllis Sommer at 12:39 PM

Yes, it's beautiful...and a lovely symbol of your love for your kids. Wear it in good health!