Where has the magic gone?

Sam has had a loose tooth for quite some time. I, personally, was a tooth puller. The thing got loose and I was all over figuring out how to get it out of my mouth fast. Sam, on the other hand, was a prolonger. He wanted to keep that darn tooth in his mouth as long as possible. 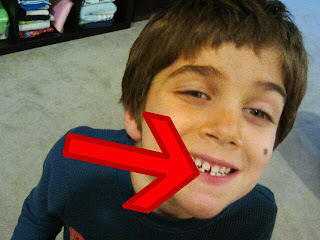 Which left us plenty of time to discuss
The Tooth Fairy.

Sam insists that it is not real.

Which, of course, it isn't.

So why am I so upset and annoyed about this? Why do I care that my child doesn't believe in a fairy tale, a fantasy, a made-up concept?

I think it's because I'm sad that he isn't at all interested in magic.


He is such a realist, such a pragmatist, that he can't even believe in magic. He won't. (Trust me, I tried.)

I've been thinking a lot about why this bothers me. And I've figured it out.

I know, for sure, that not believing in the Tooth Fairy will not necessarily lead to a lack of faith in God.
(After all, I know that there's no Tooth Fairy but I'm pretty confident about my belief in God._

But I think that is my worry. If he is so certain, so sure, so absolutely positive that The Tooth Fairy doesn't exist...how much harder will it be for me to convince him that there is a Holy One, that the God of my Ancestors is his God as well?

We talk about God all the time in my house. I want him to have a connection, a relationship, a belief.

Is that too much to ask?
Sigh....this parenting thing is hard.

P.S. Here's what I had to say when David lost his first tooth.
Written by Phyllis Sommer at 5:00 PM

I don't equate the tooth fairy with G-d. There are so many miracles that even the most logical person can understand that only G-d could have done them.

Our pastor was speaking this morning about the proscriptions against magic and equating it to fantasy novels. I thought my daughter was going to explode in the middle of the service! For some, magic is a way to illustrate (in our small human way) the mysteries of scripture. For others, it is a path towards darkness that they seem to be unable to resist. At least for your son, he knows how to hang onto something that was once very precious -- I'm sure YOU remember when that tooth first came in and how precious it was then!

Ha ha - my word verification is 'drawd' as in I drawd a picture of the dinosaur!

If it helps at all - which it might not - I have that same inability to believe in magic/the supernatural/etc, and in my case it did play a large part in eventually being unable to believe in God, but at no point has that ever stopped me from identifying very strongly as Jewish. I'm even making aliyah, as that strangest of combinations, a secular, left-wing Zionist who believes in the absolute necessity of having the Land of Israel (all of it!) as a Jewish state. It's absolutely possible to have the connection to our people, our history and our land without believing in God, and without feeling any need to dissuade others from believing.