I've Been Waiting for Gilad Shalit for 2 Years - Tuesday Torah 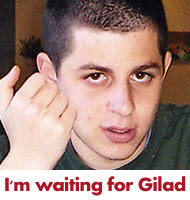 Gilad Schalit was born on August 28th, 1986, in Nahariya and raised in Mitzpe Hilla in the Western Galilee by his parents Aviva and Noam with his siblings Yoel and Hadas. At the end of July 2005 Gilad began his military service in a combat unit of the armored corps. For the two months prior to his kidnapping, he has been on duty guarding and ensuring the security of the settlements around Gaza.

On Sunday, June 25th 2006, in a terrorist attack on an IDF post at Kerem Shalom during which his unit friends have been killed, Gilad was taken captive and has been held since in the Gaza Strip by Hamas.

To this day Gilad didn’t receive any visits from an official faction, including the Red Cross, and there is no reliable information about his well being.

Two years have passed since his abduction. Lets remind everyone that he has yet to come home and demand his quick return.

On June 25th, the two year anniversary to his abduction, please replace your personal profile picture with Gilad’s picture on Facebook, Windows Live Messenger, ICQ, Tapuz, bona, Mekusharim, news groups and any other social network or blog you’re a member of, and show the world that you are waiting for Gilad Schalit’s return.

And he's not the only one. We still await the return of Eldad Regev and Ehud Goldwasser as well, both abducted at about the same time.

Their abduction, unfortunately, was part of what launched my interest in blogging. I started reading Israeli blogs as they "live-blogged" the war in Lebanon. I definitely felt like the blogging community was telling the news in a far more reliable and "on-the-scene" method (than the mainstream media). I was fascinated by articles that explained the media bias in ways that I thought were blatant and shocking.

It does seem hard to believe that it's been 2 years. And that we haven't heard anything from them at all. And that the world media is largely ignoring them.

May their return come speedily and safely. 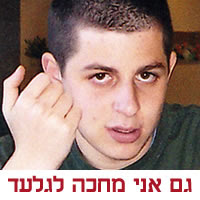 What's your torah this week?
Written by Phyllis Sommer at 12:01 AM

Thank you for bringing the plight of Gilad, Eldad and Ehud to everyone's attention.

They need to be brought home, NOW.

Thank you for that reminder. I will post it tomorrow on my blog.

My 17yo son, who shares a birthday with Gilad, will be spending Wednesday flying to Israel with Young Judaea. He will remind his fellow travelers of this anniversary.

Thank you for the reminder.

I can't imagine the pain that the abducted, and their families, are going through.

May their return come speedily and safely.

I cannot believe it has been two years. :( Thank you for the reminder. I'm off to change mine now.

Excuse the self-promotion but I also posted about Gilad (who is partly French) a while back:

Thank you so much for doing this - I made sure to do so, as well. I, too, cannot believe that it has been TWO years?!?!