The Jewish holiday of Purim is upon us (technically Monday night and Tuesday). I posted this: 13 Things I Love About Purim, go read it to learn more about the holiday.

One of the best things about Purim is the treats. We eat these delicious cookies called hamantashen. They're filled three-corner pastries that remind us of the bad guy in the Purim story - Haman, who in theory wore a three-cornered hat.

It sure is fun to make them - roll out the dough and fill with yummy stuff like jam or chocolate spread. I took Robin's idea for the chocolate spread (it's Israeli but we are lucky to have a great Israeli grocery store in the 'hood) and let me tell you, I'm never going back. (Side note: one of my kids asked if they could have it in their lunches and I, like Robin, also said no. It's definitely a sweet treat, though! And I think I'll make it a part of the Passover treats...) My creative addition to the canon of hamantashen baking is the sprinkles. If you spread them out on the table and then roll the dough out on top, the sprinkles end up in the dough and it looks really cool. The kids might've gone a little overboard on some of them.... 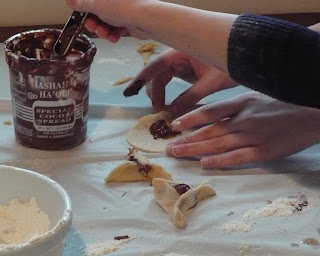 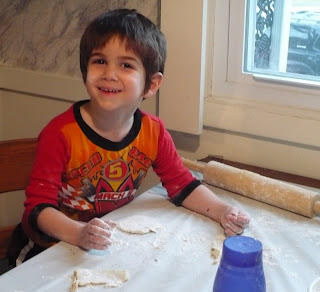 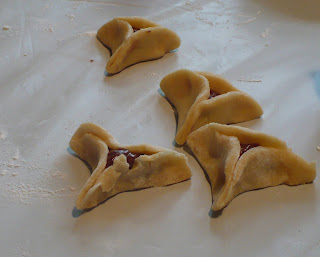 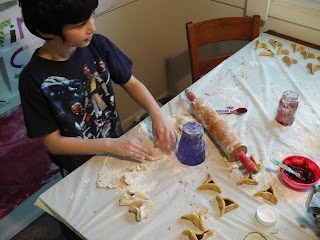 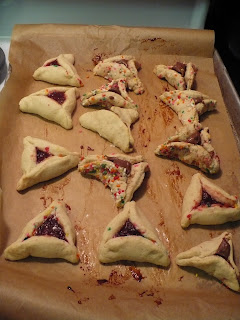 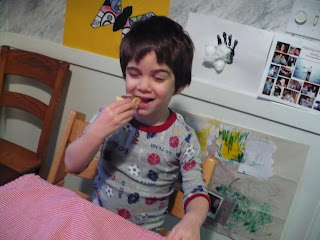 Somewhere in here is whatever must be my Best Shot Monday, right? The pictures from the Purim Carnival just didn't come out well. I think the battery on my camera must have been going...I'll try again over the next few days to get really good pictures of the kids in their costumes. Sam was a horse, Yael was a Dora the Explorer fairy (I don't really get it either, but that is the costume I bought in Tel Aviv for her) and David was a rock star (the great excitement there was that I ripped his jeans for him).
P.S. For some fun pictures of Purim in Israel, see this post from last year.
--
Haveil Havalim is up over here.
Written by Phyllis Sommer at 9:58 PM

That chocolate spread makes it a cinch, doesn't it? So easy, and a real kid-pleaser.

Love the sprinkles. We'll have to try that next year. We made another huge batch over the weekend (for both of the kids' mishloach manot, for Maya who wanted to bring for her entire class, for a plate for the neighbors, anything to get them out of the house and away from me lol) so I'm pretty much hamantaschened out for this year.

Even though we only do prune, I have a soft spot in my heart for nutella filling. I don't care for Hashachar spread, but I may consider caving in and buying it on Passover.

RivkA with a capital A said...

My favorite is prune!! We searched for it for years!! The supermarkets don't always carry it.

We also like regular jam -- especially apricot and strawberry.

For whatever reason, chocolate spread is not one of our favorites for Purim.

I do often cave in and buy it for Pesach... it's really yummy on matzah! (though I hate pumping my kids so full of sugar!)

Next year I will have to attempt making Hamantashen with the boys. This year my attention was on shopping and planning for Passover already. Yours look delicious - enjoy!

thanks for the link on your 13 fave things about Purim...I learned a LOT! LOVE Matanot L'Evyonim...that's just awesome! The fact that drinking to not be able to tell the two apart is so cool and funny. I think once I can, I'll use that method for solving some of my problems :)
My pick for best shot would be the baked yummies right out of the oven. I'm about 8 months pregnant, and am in NEED of chocolate!!!!

What a yummy looking photo journey of baking!

Great photos...and one or two would work well in Ruby Tuesday.

We make our prune filling from scratch. It's incredibly easy. There's a recipe on my blog (just click on my name.)