Sometimes I impress myself...

Preparations for Pesach are underway! While I'm not as organized as some people, I do have my own little systems in place for creating a holiday experience. I don't have to make Seder, which is a blessing to me, and we're not frum about our Pesach observance. What do I mean by this? We eat kitniyot, but not in excess. I don't serve rice and beans, for example, but we'll eat soy hotdogs. This works for us!

I have finally figured out what I hope is a good system. Last year, I actually kept track of what I made and bought and used. I forgot that I had made this list, and was very excited when I found it. Hence the title of this post! 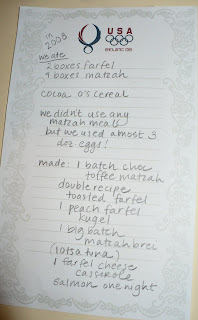 Not bad, huh? I remember that we ate a lot of matzah with cream cheese last year. I also remember what a big hit those chocolate o's cereals were. Most people think they're gross, but my kids find them to be a delicacy since they don't get sugar cereals all year long. See how this works? (I find it hard to believe that I made only one batch of matzah brei, though, since I remember making it a lot. I think I made more at the end to use up all the extra matzah.) I know that last year I decided against matzah-meal pancakes because they're just too much work and I think I'm going to stick to that restriction this year. I never buy the pre-packaged mixes for things like muffins or brownies, either. I figure we can get by for a week without that kind of stuff. This doesn't take into account all the fruit and veggies that we buy and eat, also. I always eat a lot of salad during Pesach.
So I've got out my cookbooks...these are my two favorites... 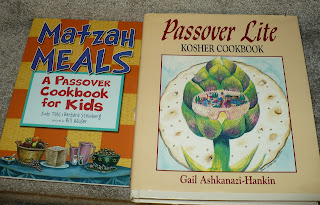 and now I'm getting ready to plan the menus for the week of the holiday. This is always tricky, because you never know what the kids will eat. But I can handle it. David went through the kids' cookbook and picked a few recipes he wants to make. Since we're on Spring Break for most of Pesach, that should make for some interesting activity.

I'm definitely going to make a batch of Toasted Matzah Farfel, which I think is a great snack food. (And the Tam Tam's are back! Yay!) I was also noticing that there are some recipes that I've wanted to try but never have made. Like this one for something called Geschmierte Matzoh. Have you ever made it? It sounds yummy. Plus I have to plan for the Matzah Brei Cook-off, for which I've been quite a champion. Each year we have a cook-off on the first morning of Pesach, and I'm always trying something new.

heat oven to 350 degrees. Coat the farfel with the egg and spices. Spread on a cooking sheet and bake for 20-25 minutes until it smells and looks delicious. When it's done, break it all up into smaller pieces and store in a bag or container for the week of Pesach. Start with a double batch. Good as "croutons" on salad, in soup, and as a nosh. Mmmm....

After writing this post, I noticed that Mother in Israel does the same thing.
How do you plan from year to year?
Written by Phyllis Sommer at 10:29 AM

Jendeis' Pesach Prep: Read posts from organized people about pesach prep. Panic. Go overboard making a cleaning calendar, meal plan and grocery list. Panic. Read more blog posts. Panic again. Don't actually do anything because too busy panicking. Repeat until day before Pesach. Have husband buy paper goods (plates, plastic silverware, tablecloth), while I tape cabinets and throw everything out of fridge. Berate myself and commit that next year I will not do this to myself.

I keep all of my Pesach menu ideas in an Excel document labeled for each specific year. At the end of Pesach, my husband and I go over the menu and make comments. We decide what we like and what we do not like. This seems to work really well for my family.

Wow, you all are so organized about Pesach. We go to the Kosher club slightly before Pesach, buy food and eat. But, I really want to try making chocolate toffee matzah this year. Would you be willing to share your recipe? Thanks!

I wish I had made one of those! I also like Cassidy and Eric's idea.

Funny, I have the opposite approach to kitniyot - I will serve rice and beans, but I don't buy any processed foods. I like to pretend I'm sephardic whenever possible.

I aways make one of those lists...then I leave it somewhere, find it around Rosh haShannah, put it somewhere I won't lose it and then find it again around Shavuot. I love the excel idea, but I'm afraid I would lose my computer so I decided to use Google Docs this year. If the internet disappears I guess you know who to blame. ;)