This might have been one of our best Purims ever.

A brief recap and some other thoughts:

- Saturday night we celebrated Martinis and Megillah at the Senior Rabbi's house. It was a lot of fun, with really weird-colored drinks that tasted great! It was a fun way to kick off what became four solid days of Purim fun.

- Sunday was the Purim Carnival. Kids had a blast. It was great. Our Purim spiel was "Shushan Idol" based on American Idol. I wrote it, and played Rabbi Seacrest. It was a big fun hit! 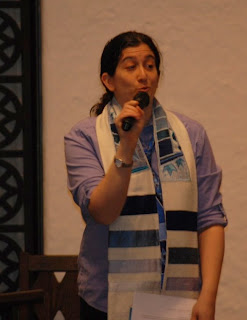 (me as Rabbi Seacrest, host of Shushan Idol. Not a particularly inspired costume, but a fun spiel.)
- As I said last year, I've decided to put my money where my mouth is and provide the Purim costumes that are desired by my kids. Sam really really wanted to be a horse. Yael didn't have an opinion, but her Dora the Explorer costume came from Shuk haCarmel in Tel Aviv. David wanted to be a rock star again but I think he's still pretty excited about wearing ripped-up pants. I could not get them to pose nicely in front of quiet backgrounds. That would have been too much, right? 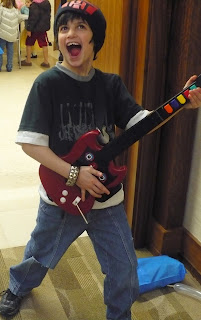 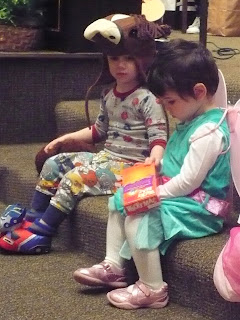 (oh yeah, and Sam took off the horse costume after about 10 minutes. He stuck with his usual pajamas. That's right, the rabbi's kid wears pajamas to Sunday School. With Transformers slippers. He kept the horse head on, though. For three days straight.)
- Monday night, Erev Purim, was lightly attended at the synagogue but still fun. We did a March Madness theme, and tossed basketballs all around the sanctuary during the service. I did my favorite Purim shtick: "Give me a G! Give me an O! Give me a D! What's that spell? God! Yay, God!" I sang a newly wonderful song "On with Purim" - to the tune of "On Wisconsin" in protest for having to wear an Illinois basketball jersey...

- Tuesday is my day off. What a great day to have Purim, isn't it!? I spent the day, as I always do on Tuesday, with Sam and Yael. We dressed up in costumes (I wore my favorite Purim hat) and spent the morning delivering Mishloach Manot all over town. I think I strapped them into their carseats over a dozen times and my shoulders and back are feeling it... 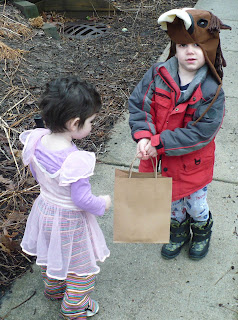 They had so much fun and definitely fought over who got to carry each bag and who got to ring the doorbell. Sometimes, rather than fight, we just rang it twice. I knew who wasn't home....!
- for dinner, we had Pizzatashen. Okay, so they were actually calzones in the shape of hamantashen. But they were pretty good. I used the recipe for Pizza Dough from the Vegan Lunch Box cookbook. They came out a little dry but still yummy. We ran out of hamantashen (I think I'm glad about that) and our guests brought flourless chocolate cupcakes. A perfect end to a perfect day! 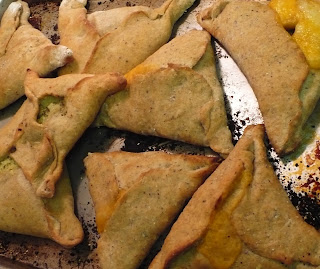 One more thing to say about Purim.
The concept of gift giving (mishloach manot) on Purim is primarily related to the giving of food. But we've decided, out of frustration with the whole eight days of Chanukah commercialization issue, to eliminate Chanukah presents in our house. And replace them with Purim gifts. We announced at Chanukah that this was the last year for Chanukah gifts within our immediate family. (We're not telling the grandparents or anyone else that they can't give our kids gifts.)

It sure created a lot of Purim excitement.
And that was the point.

Mazel Tov on the Wii. Such fun. So it looks like you found a good way to connect your blog to FB without turning over blog content to them. I hope it gets some blog traffic. Let me know. Happy Purim!!

Sounds like an utterly delightful holiday. I love the pizzatashen - I am so adopting that next year.

The kids look adorable, and all the cuter for they're being "unposed".

Great post! Thanks for making Purim so much fun!!!

I couldn't wait to see a picture of Yael in the Dora costume!!! I was wondering how it would turn out. Shushan Idol sounds like it was a blast :) YAY FOR PURIM!!! Less than a year until it's back!! (So early next year, right? Like the end of February, methinks...).

Love the Purim/Hanukkah switcharoo. And I love reading about your adventures. As soon as I figure out how to Follow and to add you to my Blogroll, I shall do so. I am frighteningly dense about these technical matters.

If you ever visit that, do share any comments you might have. It is a new venture and I want it to be useful.