Sam really wanted a "monster truck" party for his birthday.

Let's go back a step...our approach to birthdays tends to be low-key but creative. I love to come up with a fun party idea that we can execute at home. We've done superheroes, ninjas, and legos. My kids get one invitee per year of age (a concept I think I'm about to regret with next week's 8-year-old party) and I try to do homemade cakes.

So we invited four friends (3 came, one was downed by the nasty cold bug going around). We planned a few games but the kids had so much fun just playing with all the monster trucks we'd collected that we almost ditched the games! But each time there was a little lull, we pulled them in to... 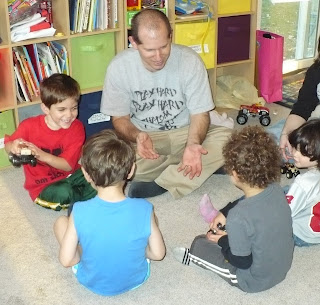 Pin the License Plate on the Monster Truck
(there's almost always a version of this old standby at our parties.) 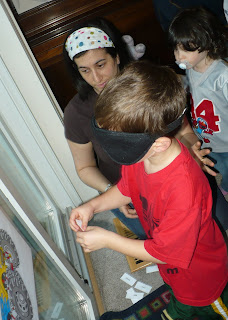 We also colored a monster truck mural and offered some truck racing...
And of course, cake eating! 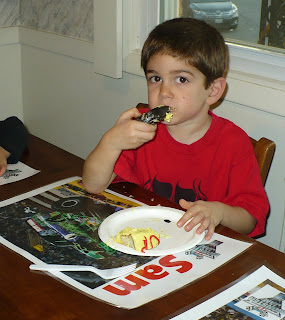 Can you see the cool placemat under his cake? I made these for each kid, personalized with a different truck picture and their name. They were a huge hit - the kids were so excited to take them home. We also gave each child a small monster truck as a "thank you for coming to my party" present. (That's what Sam called it.)

The whole party was set for one hour. The friends stayed a little longer because they were having so much fun playing.

Doesn't get much better than this!
(Come back tomorrow for cake pictures - the best part!)

Written by Phyllis Sommer at 12:30 AM

You should have shown a photo of the cake. It was VERY impressive.

Now that's a party I would have like to have seen.

I heard you gave a rocking presentation at the biennial on social media. Do you have any handouts or notes I can peruse? I'm always interested in learning from you, my blogger rebbe.