I love to make hamantaschen. Those are the three-cornered filled pastries that we eat for the holiday of Purim.

Purim is only about 20 days away. And this year, I've decided to take my baking very seriously.

If there's anything in life that should be taken seriously, it's baking

I have a family recipe. We've been making it for years. I promise to share it in later posts. It's good, it's what I grew up eating. I thought it was the only way to make hamantaschen! But I've learned that there are many recipes. So this year, I've decided to test some of them out to see if I can find "the best" one out there.

So, welcome to my Hamantaschen Test Kitchen!

Today's recipe is adapted from a couple of different ones, in a category known as "cheese hamantaschen."

Cream together the cheese and the butter. Add in sugar and beat until creamy. Mix in flour and salt. Chill 4 hours or overnight. Roll out, fill (I used Israeli chocolate spread - LOVE it) and bake at 400 degrees for 12-15 minutes.

Verdict: These were really yummy. The original recipe didn't have any salt and only 2 tablespoons of sugar. It's good, but a little bland. My additions perk it up a bit. I'm sure some orange zest would be nice in there too. It's a very pastry-like dough. They formed well and baked up nicely. Most of them didn't open up in the oven (which makes them not filled but more like cookies with a frosting baked on!) but the dough was tricky to work with. These would NOT work well for a group of kids. It's also a pretty small batch, but that's obviously fixable by doubling or tripling the recipe. That's a lot of cream cheese, though!

(Oh, and obviously, if you don't want dairy hamantaschen, skip this recipe!) 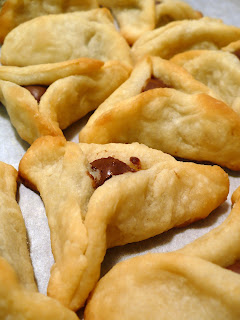 Don't they look yummy???
Written by Phyllis Sommer at 8:46 PM

Best. Hamentashen. Ever. Trust me on this one.

Was planning to start the great baking project this past weekend...but it was not to be.

I'll have to rely on your recommendation this year.