As I said earlier, I'm on a quest this year to try out many different types of hamantaschen recipes.

A few days ago, I began a conversation on Twitter, musing about favorite types of hamantaschen. Some people are very opinionated about it!

And my whole world exploded.


Gingerbread Hamantaschen!?
I love gingerbread. Love it. Just the word makes me happy.


It's very similar to other gingerbread recipes I've made before. I do like gingerbread. Have I mentioned that before? And hamantaschen. So to put the two together... 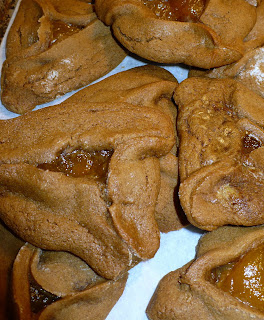 Some general comments about the recipe and the finished product: Pam suggested that the recipe might need more flour. I didn't think so, and it all worked out fine, until the very end, when I tried to remove some of them from the parchment paper after they were cooked. And the middles fell out. Yep, that's right. I was so shocked that the photo was out of focus. They still tasted yummy (who would let that go to waste!?) but didn't quite work. But that was only a few of them. The rest turned out fine. Maybe it was the flour, maybe those were rolled too thinly. I'm not sure. (oh, and I was out of cloves except the ones that live in the Havdalah set and I thought that they might be slightly dusty? so I left them out and didn't notice a loss.)

I used Marcy Goldman's technique of brushing the whole inside of the dough circles with egg wash before putting in the filling. I think it really helped to keep them tightly closed. I used peach and apricot preserves, high quality and yummy stuff. The taste combination was fabulous.

It's not a traditional hamantaschen, for sure. But it's delicious and intriguing and unique and wonderful!

The only other thing...I should have pulled out my KitchenAid mixer instead of doing it by hand.
It was bad for my favorite spatula: 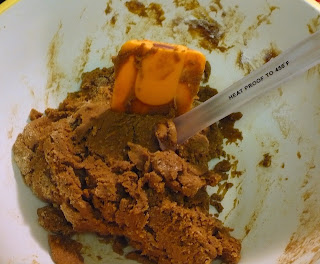 A casualty in the quest for perfect hamantaschen. Totally worth it.

I'm with you. Gingerbread and Hamantaschen are very high on my list of favorites!! I've printed the recipe and its sounds like a great snow day activity.

Please save some for me in the freezer

Gingerbread actually might go VERY well with one of last year's new tastes: pumpkin hamentashen!!! Ginger and pumpkin: what could go wrong???

these sound *amazing!* i do tend to be a traditionalist when it comes to hamentashen, but i can't fathom a single thing wrong with this recipe! thanks for sharing it!

Wow those look delicious, though I have to be honest and say I am not really sure what they are.