This could also be subtitled "The I'm a Bad Ima Cuz I Didn't Want My Kids to Help With These Post" - but maybe that's another day.

Welcome back to the Ima on and off the Bima Hamantaschen Test Kitchen! Today I made two recipes from Marcy Goldman, author of A Treasury of Jewish Holiday Baking

The first was her "Basic Hamantaschen Dough," available here.
Then I made a batch of her Chocolate Hamantaschen, which is similar. This version of the recipe was printed in the Washington Post, it's not exactly the same as the one that I made from the cookbook. (There is an online recipe here that also sounds good.)

Both were absolutely fabulous. I'm a new fan of this great cookbook

The basic dough made a really nice cookie-like hamantaschen. A little sweet, very tasty. The chocolate dough was much softer, but tasted incredible. I would even consider making roll-out cookies with this recipe at other times of the year. Of course, I filled them with chocolate spread, but I also used some nice strawberry jam that I had in the house. Mmmm....

Don't overfill your hamantashen...and I recommend the egg wash, it really helps keep them together. 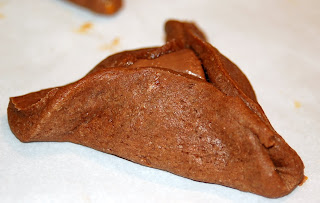 A finished "regular" with strawberry 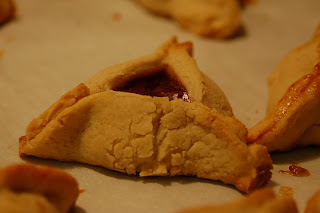 Then I had the um...inspiration...to make a marble dough. I had scraps of both blonde and chocolate. What do you think? I don't think they're so pretty. Tasty, of course. I have to figure out how to get mine to look like this. 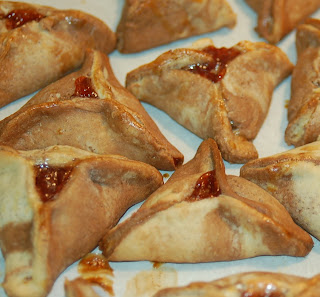 I think that when this is over, I might not want to look at any hamantaschen for a whole year. I'm just sayin'.

Stick around, I think I might have one more in me. I've got a real desire to try out Yeast Dough Hamantaschen. But I also have to put together some Mishloach Manot...so we'll see!
Stay tuned...
Written by Phyllis Sommer at 10:56 PM

Our temple group had an "Iron Chef - Hamantaschen" contest today - and I made ours using the basic hamantaschen recipe you posted above. WE WON! We made ours with nutella and others with apple pie filling and then sprinkled the whole thing with cinnamon/sugar. They were delish! The recipe doesn't mention refrigerating the dough before rolling out - and ours DEFINITELY needed - in fact I put in the freezer for 20 minutes before rolling (after being refridgerated all night) Then after the hamantaschen were stuffed and folded we put back in the fridge for 20 minutes before putting in the oven (someone had suggested it to help make sure that they didn't open back up in the oven.) They were great! Thanks for posting.