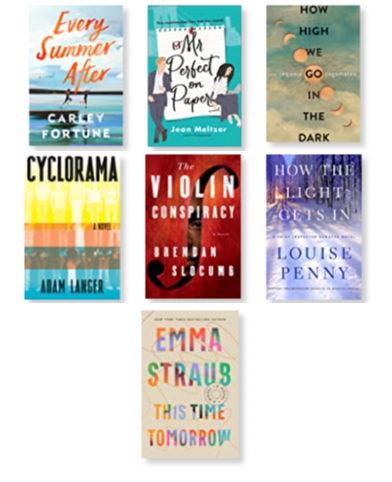 This Time Tomorrow by Emma Straub - I need to say "wow" on this one. It started out pretty innocently, and then it turned into a time travel novel, and THEN it turned into a novel about grief and what it would take to spend just one more day with someone you love and I'm going to say "wow."

How The Light Gets In by Louise Penny - She's always on the list of "if you like Daniel Silva" and I asked a friend who is a fan to suggest a good starting point for an Inspector Gamache novel. After I got past some of the French, I found it very enjoyable and could definitely see myself reading all of these someday.

The Violin Conspiracy by Brendan Slocumb - Ooh, this one was good. A mystery about a black classical violinist with a super-special violin. So many layers and I really liked this one a lot.

Cyclorama by Adam Langer - Let me start by saying the first half of the book was SO cringey with the teacher's behavior that I almost quit it - but a friend's review kept me going and I thought it was really great. A Chicago high school puts on a production of The Diary of Anne Frank in the first half of the book, and the second half follows each of the actors AND keeps the Anne Frank connection going - it was really unique and powerful.

How High We Go In the Dark by Sequoia Nagamatsu - This book was breathtaking. It starts out innocently enough with a discovery in the Arctic, and spans decades of heartwrenching, interlinked stories that speak to who we are as humans, and what we are willing to endure and what will we become...heavy and a little bleak, but wow.

Mr Perfect on Paper by Jean Meltzer - let's just say I needed a little fluff after the previous book, and this was great. A little heavy-handed on the "Jewish marriage" thing but overall a fun read. (Also, big fan of the Jewish romance genre!)

Written by Phyllis Sommer at 2:28 PM