Behind the Scenes of Day 333

In a really unplanned move, I have been posting a daily picture of Solly on Facebook since he was born.

It started because I posted his first picture with "Day 1" as the caption...and it just...happened.
(I've written a little bit before about the Picture of the Day Project)

Many many people are now looking at his sweet little face each day and I even get cranky messages from some people when I am late to post the Picture of the Day. My kids are in on the action, sometimes helping to take the picture, sometimes wanting to be in the picture. Friends are excited to "be the picture of the day" and I joke that I could auction it off and somehow pay for college with that money. (or...not.)

It has become much much much harder to take the Picture of the Day.

The kid moves around a lot.

And my phone camera, with which I take the picture, is veeeerrrrryyyy slow.
Like a turtle. A flash-less turtle.

(And even though my husband says "just use your real camera!" I feel as though it would be somewhat untrue to the whole spirit of the Project, which didn't have a spirit to begin with but now seems to have a life of its own.)

Here are all the pictures that I took...

All to get to this picture, which was honored to be called Day 333: 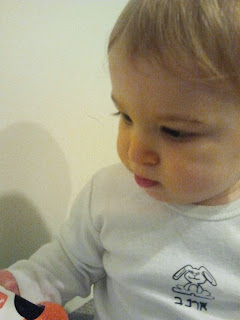 When I announce to friends and family that I plan to stop this nonsense quit post less pictures of Solly after Day 365, they do threaten some kind of friendship mutiny.